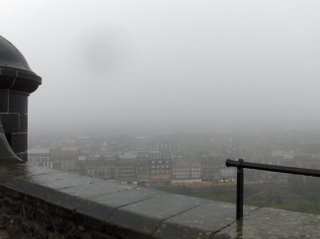 As I time this I am still suffering the consequences of my Edinburgh trip *hack hack* *cough cough*. Yup, as you can see from the picture on the right, my flatmates, myself, and some other friends decided to go to Edinburgh for the day and brave the Scottish rain. Though I will say, I far from regret going. It was a very fun trip, and Edinburgh - though something of a tourist trap - is a fascinating place. In fact, since it is only an hour's train ride (barring delays) from Glasgow, I am intent on going again during better weather. As it stands, I am thankful that the UK has some pretty potent cold medication available over the counter.

There is some confusion among the non-UK'ers of how to pronounce Edinburgh. Just for the record, I heard it pronounced Ed-in-ber-oh by the tour guide, and Ed-in-bro by the conductor of the train. I guess it largely depends on where you're from. As I mentioned, it is an easy hour's train ride. Once you get off the train at Waverly Station, you have immediate access to tour buses, and for around £10 can ride all four. We were actually able to do fragments of almost every one. Though the only one I liked was the green bus (Edinburgh Tours, I believe) because it had a real tour guide rather than a recording. You get a much better feel for the area when the guide can adlib, and can acknowledge that the heavy mist is obscuring your view of what she is talking about.

The part of Edinburgh that we visited is called the Old Town. It includes the Royal Mile, and Edinburgh Castle. The Royal Mile takes at least a day to see, so I only saw a fraction of it. It includes museums, churches, shops, and many other points of interest. Edinburgh Castle is up Castlehill at the head of the Royal Mile. The castle is an impressive place to visit, and could itself house a small town. It is primarily an outdoor destination, so I regret that I did not see nearly enough of it because at that point I was soaked. Some of the indoor sites, that I unfortunately didn't see, are the dungeons and the crown jewels. I did get to see the oldest part of the castle, which was Saint Margaret's Chapel. My only criticism of Edinburgh Castle is the very modern elements. It is feels like it is filled with shops and cafes, which makes it feel like more of a tourist trap than an historical site. However, that may just be the wet shoes and socks talking. After stopping at one of these cafes for coffee and a scone, we decided that Edinburgh Castle was best left for a return trip on a nicer day, and headed down into the Old Town of Edinburgh on the Royal Mile.

This part of Edinburgh is actually a city built on top of a city. During the 16th century Edinburgh's two main thoroughfares, High Street and Cowgate, were linked by a labyrinth of Closes and Wynds (narrow alleys) which often housed the poor people of Edinburgh. As the population boomed, new housing was built, and to provide safe passage for horse and carriage, massive North and South bridges were built. The South Bridge, originaly concieved of as a shopping street, contained a series of vaults. These approximately 120 vaults were used for storage and workshops for South Bridge businesses. However, rushed construction resulted in leaky vaults, and the idea was soon abandoned. Once the industrial revolution set in, the vaults became slums - offering squalid, dark, and wet accomodation to Edinburgh's poorest, as well as providing an anonymous hiding place for criminals to practice their trade. 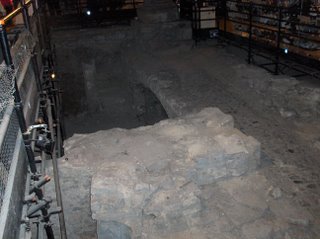 During the 1800's, tons of rubble was dumped into the vaults, sealing them off. After being forgotten for over a century, the vaults were excavated starting in 1988. One of the many cellars and old wynds of Edinburgh can bee seen in the Tron Kirk, which is now an information centre. Marlin's Wynd (left) was buried along with the rest of the cellars and vaults of 16th century Edinburgh. The Tron Kirk was built over top of it. Legend has it that the builder of Marlin's Wynd was so proud of his work, he asked to be buried under it. His burial site has not yet been found though. Unlike the more dodgy wynds of the time, Marlin's Wynd residents were prosperous businessmen, lawyers, and surgeons.

Behind Marlin's Wynd and the Tron Kirk are the vaults of the South Bridge, in which you can partake in a haunted underground tour. This is something we all thought would be good fun, so we paid our £6.50 and off we went. I have to say that the tour guide was very very good at his job, because he had the whole lot of us going. First you walk into this squalid looking room referred to as an old student's residence. All the relevant "we're not responsible for what misfortune befalls you during this tour" warnings are given, and off you go... save for two people who chickened out in our group. Now, did they really chicken out? Or were they stooges? I'd have to take the tour again to figure that one out.

You are then lead into a claustrophobic passageway lit only by green light, with vaults leading off the sides. You are told about various apparitions witnessed in the passageways and vaults, some harmless, others malevolent. The passageways and the vaults are damp, and on a rainy day like this was you can hear the dripping of water. The guide then proceeds to talk about the dark and dangerous history of the vaults during their slum period - stories of squalid living, murder, mass deaths from plague and fire, and other disturbing stories of the short and painful journey that was life for a poor person at that time. All the while, the guide keeps tripping over things and making loud noises, readily admitting that he is a klutz, but relishing all the while that he is getting a rise out of you. Finally, in the darkest vault (with no light) the guide tells you a horrifying story about a room full of people cooked to death during an above ground fire that heated the vault to fatal temperatures.

So, are there ghosts? Well, I won't say. I can say that even without the showmanship the vaults that I saw were cold, dark, and uncomfortable. They would have been a wretched place to stay and, haunted or no, are a rather frightening place to be. Throughout the tour the adrenaline was certainly pumping, and we call clustered together anticipating that some spectre would come and ruffle our hair or pull at our pantlegs - or worse. At the same time though, it was the most fun I think I've had on a tour. I got a good healthy scare in a fascinating place, and got to hear some incredible legends. At the end of the tour, you get a free whiskey and a cookie. After we were out of the scary underground, my flatmate Lesley, who's respective arms we had mutual death grips on the entire time, thanked me for letting her hold on to my arm during the tour (we wound eachother up pretty good... so chalk one up for the power of group psychology there)... ha! I wouldn't have let go in a million years!

After the scary tour we took some tour buses around Edinburgh, and then took the train back home to Glasgow. Unforutnately, between the rain and the scary I didn't take too many pictures that day, but what I did take I've uploaded onto flickr. I'm already planning my next trip there, and would like to see Greyfriar's Bobby (the little dog who layed at his master's grave) and Edinburgh Medical College, the alma mater of Sir Arthur Conan Doyle. Maybe I'll even do a few more haunted tours... but only if I have a flatmate's arm to hold onto.
Posted by Erin at 5:58 PM
Labels: Scotland 2006-2007

Sounds like a good bonding experience. I have to say, I admire and appreciate the lengths at which you report on your journey. I know if it was me, I'd be like, "I went to Ed-in-bro, got a cold cuz it was raining." And then list where I went. You really take us with you. Awesome.

Oh, I really feel for you, Erin. I get deathly sick every time I go to England and it happened to me when we were in Scotland in '04. When you become acclimatised, hopefully you'll get better and I hope it won't be long.

I agree with you about Edinburgh Castle. I was disappointed in it. Oh, it was grand enough, but I didn't get the "feel" for it like some other castles we went to. They've mostly turned it into a War Memorial now. The Dungeons is a fun experience - just outside the train station. Lots of zany showmanship in there, but interesting nonetheless.

There's just so many fascinating places to visit everywhere - I'd love to go again.