Isle of Arran and Castle Brodick 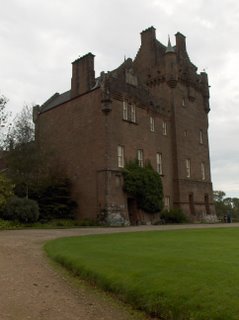 On Saturday, September 23rd I took a trip to the Isle of Arran which was organized by the Chaplaincy. The Chaplaincy at Strathclyde helps run the Glasgow International Students Welcome Programme. I had to get up super early to take the bus to catch the ferry in Androssan.


I have to admit to being a bit disappointed in Castle Brodick. The oldest part of the castle is mediaeval, but you only see the Victorian era apartment of the Duke and Dutchess. Plus, there's no photography allowed inside the castle, so the excitement of being able to share in the experience was completely lost. Though the inside of the castle that we did see is very beautiful.

For the rest of the day on Arran I spent my time simply wandering around. It was a little rainy for the first half of the day, but by afternoon it was warm enough to take my jacket off. I decided to go down the pedestrian paths into the village. After visiting Arran Aromatics (a soap factory/shop), Arran Brewery, and a few other shops, I tried to go back up the path I came and was stopped by a rather surly woman. Because my tour guides did not give us a ticket, I was not allowed to go back to the castle. Thankfully, another group of students (and Canadians as well) who did get tickets (because they went by train rather than the coach bus) vouched for me. At that point we were told that the path was closed due to flooding (I did notice some damage on the way down) and told the correct path to take. 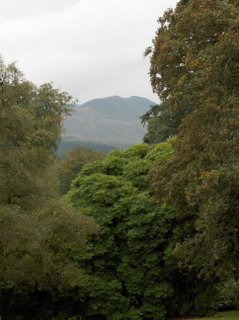 I got to play tour guide next - as I got back to the castle I saw the remainder of the group headed down the same path. So I walked with them down the right path back to the village and hung around there again.

Arran Isle is very beautiful. It is green, with small mountains, and lots of sheep and cows. I want to go back to Arran (which is pretty simple by train and ferry) to see the rest of the island.

I met quite a lot of other students as well. I met Susie and Simon. Susie in on exchange from McGill University in Montreal, and Simon is from Hong Kong - they are both going to University of Glasgow. I also met a lady from Tennessee who is going to one of the colleges.