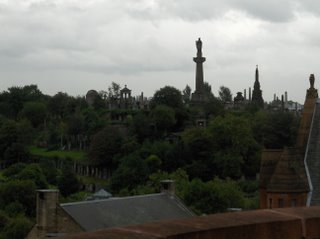 "The Glasgow Necropolis is a Victorian cemetery in Glasgow. It is situated on a hill above and to the east of Glasgow Cathedral (St. Mungo's Cathedral). Fifty thousand individuals have been buried in about 3,500 tombs.

It was conceived as a Père Lachaise for Glasgow, and subsequently established by the Merchants' House of Glasgow in 1831. Alexander Thomson designed a number of its tombs, and John Bryce and David Hamilton designed other architecture for the grounds.

The main entrance is approached by a bridge over what was then the Molendinar Burn. The bridge, which was designed by James Hamilton, was completed in 1833. It became known as the "Bridge of Sighs" because it was part of the route of funeral processions (the name is an allusion to the Bridge of Sighs in Venice).

The cemetery's paths meander uphill towards the summit, where a dominating statue of John Knox was erected in 1825. The Glasgow Necropolis was described by James Stevens Curl as "literally a city of the dead". - from Wikipedia

I've been to the Glasgow Necropolis twice now; once on my own and once walking with Lesley and Ellen (my two flatmates who are in my program). Although it is a cemetery, people use it for walking their dogs, jogging, etc. Actually, Lesley got attacked by a fair-sized terrier her first time out jogging there - she's alright, but she wound up climbing up on one of the graves to escape it in an ordeal that lasted a good twenty minutes or more.

It is fairly run down, with the mausoleums and crypts almost all desecrated. Many of the monuments have either fallen over of their own volition, been set down by the parks staff to prevent injury, or have been outright pushed over by vandals. However, there is a volunteer group assessing the necropolis with the aim of restoring it. They were formed only last year, so I imagine it will be some time before the place is fixed up. It is a massive cemetery as well. Although I've been in twice, I've only seen a fraction of it. The paths spiral up the hill, cut across eachother, and then track back downhill again. From the Bridge of Sighs you can either go straight up hill to the left, or go downhill to the right (passing behind a brewery) and track back up again.

The monument to John Knox is lit up at night, and can be seen from our flat window.

I've taken a ton of photos of the Necropolis, and they are over at my flickr account for you to enjoy.
Posted by Erin at 2:17 PM
Labels: Scotland 2006-2007