Well, my mouth is finally starting to feel better, as is the rest of me. I may finally have this new microflora licked (knock on wood).

My time has been primarily filled with lectures and labs, and trying to take care of myself in terms of food, shelter, and clothing. I started Tai Chi on Monday which will hopefully help with the health thing. Found a great food joint called Best Kebab. Burgers for £1.90, huge döners for £3.70 (and I mean huge... an entire meal in a sandwich), and other Turkish fare. Anyway, for days when I'm tired of eating the same chicken soup for 3 days in a row, it make for a relatively cheap way to break up the culinary monotony.

We got our 8th flatmate last week. Kate from China. So far I haven't had much of a chance to talk to her. That's what happens when you get a new addition when school is in full swing. Luckily she isn't fresh off the plane or anything. I think she's actually been going to Strathclyde for more than a year - so she knows the ropes already.

Yesterday we did this wicked glass breaking and reconstruction group exercise in the lab. We had to break and reassemble a pane of glass, as well as record how far the glass traveled, and other instructive facts. Reassembly was like doing a giant, very sharp jigsaw puzzle. 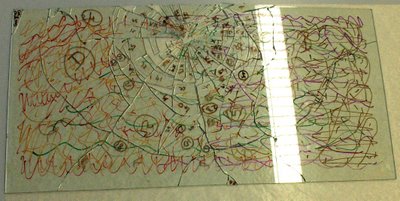 The scribbles represent the dirty outside surface of the window... something that would be used to determine the inside and outside surface of each fragment of glass. But forget the technicalities of it... it just looks really cool!

Today I did fingerprint enhancement and recovery. This one started out a little rocky, but wound up being really fun and interesting. It's a really dirty job though. The powder sticks to everything (as it should) and gets everywhere if you're not neat and tidy about it. I'm proud to say that me and the other girl working on it managed not to make a complete mess.

Anyway, here's a fingerprint of my own I lifted off a piece of paper using aluminum powder. Isn't that just too cool. Yes, I'm a total geek! ;-) 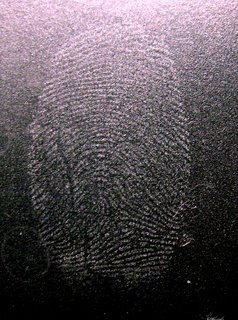 I have tomorrow off, hurrah. But next week will be my second week of hell (the first being the 8 instrumental labs I had in the first week) with the entire week packed with labs, as well as tossing a student staff meeting and some lectures into the mix. After that, my labs space out again for another couple of weeks.

That glass stuff looks like a lot of fun. I may go do that myself if I get bored. The fingerprint is nifty too. Glad you are feeling better!

I still have a bucket full of glass from our patio door you could come home and put back together!!!!

For a clean break and enter......
Spread treacle on a sheet of brown paper - place over window pane - bang on paper and break glass. Not much noise and it all comes away nice and clean. Now be careful not to hurt yourself on the jagged edges when climbing or reaching in!!!!!!

Above was related to me by my uncle a retired London Metropolitan Police officer. He said they actually encountered that method quite a few times.

Ha! Awesome!! I'm going to relate that to my flatmates that are in the same program. :-)

The fingerprinting can't be any dirtier then when you were plalying in the collections cataloguing everything in the musueum.

Glad to hear you are feeling better. Getting bored here with weather, all we have been having is rain.

He he, you actually should have seen all the gear I had to wear for the fingerprint lab... it was really something. Would have made a great picture. But save for when I took the glass picture, we're not allowed to have anything in the lab that wouldn't survive being dunked in a bucket of disinfectant. :-(

I had my biohazard lab coat on, which is a labcoat that buttons up at the side all the way up to the neck (the lab we work in is a level II biohazard lab because we have to work with blood and bodily fluids), then another paper lab coat over that, then a pair of safety glasses, then a dust mask, and a pair of latex gloves. Though, I would have liked all that gear when I cleaned the mouse poop out of the upstairs drawers in the Bowron House. ;-)

I think the closest thing I came to getting into that was that messy at the museum was that summer I dumped photocopier toner all over the photocopy room (if you're wondering, yes... that's why the inside of the photocopier is so grey and messy looking). That was back when Naomi and I were still working together. I wonder if Dianne remembers that? :-)

Erin, where are you, man? We need an update, and you can't even blame being sick anymore (glad you're feeling better!). I like the glass breaking lab. Do you specialize in a particular field in forensics, like molecular biology, or do you learn how to do everything? It's so cool!

Hey hey! I'm still here. It's been my really busy week this week, so no time for blogging :-(. So far this week I've mainly had to concern myself with semen, blood and saliva. I think I end off the week with document analysis, which will be a nice break from the biohazardous stuff.

I'll be specializing in biology next semester, but right now we're getting an overall education in everything, and where each method fits in the whole scheme of things. There's also a lot of professional development stuff. Since we all come from different jurisdictions too, they are trying to be as broad as possible. It's really fun though... and very hands on.

Anyway, I'm hoping to update my blog this weekend... mostly to complain about the weather... though I shouldn't. It could be worse... we could have snow (but we don't... ha ha!).