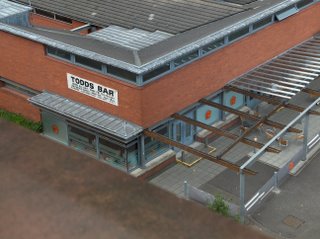 Wow. I have been incredibly busy. I need to start taking those multivitamins I bought.

When the fire alarm went off in our building a couple of days ago, I came to realize that there are alot of people in the M.Sc. Forensic Science program living in our block. Apparently we're being dubbed "those CSI people." It never ceases to amaze me that when I talk to people who speak english as a second language and they look at me blankly when I say I'm taking forensic science. But then I say (tiredly) "CSI" and the lightbulb goes on. It's like in Dogma when Alan Rickman is talking about being the voice of God, and Bethany stares at him blankly. "You people. If there isn't a movie about it, it's not worth knowing, is it?" Lol. Pop culture is a powerful thing.

Labs started last week, and they got off to a really rough start for me. The picture to the left is another view out of my bedroom window. That's Todd's Bar. I like Todd's normally because it's never very full and we can slip out and have a pint if the fancy strikes. However, Monday nights seem to be event night at Todd's and that begins at around 10 o'clock at night... which you all know is my bedtime. The festivities last until around midnight, and then the lollygagers all stumble home hooting and hollering for another hour after that. When Todd's is busy, I've given up on going to bed at all, and have resigned myself to watching tv until most of the hooplah has died down. Sunday nights, somewhere on campus, there is another loud party going on with music and a band... not so bad to listen to really... until the drunken partiers walk home... right past Todd's bar again. So, Sunday and Monday night got me very little sleep, and I wasn't a very happy camper walking into the unknown Tuesday morning.

Anyway, we are being thrown into the deep end in terms of labs. Basically, you get plopped down in front of your experimental materials, instrument, whathaveyou, with a set of sometimes dubiously clear instructions and basically told "have-at-'er". Now, to some people this is a-okay. To a bunch of M.Sc. students who are likely all over-achievers (I include myself in that) it turns you into a little ball of stress. Oh, did I mention that there really is precious little access to someone to ask questions of? As I said, chucked in the deep end with maybe only 5 waterwings to share between us. But, other than the stress and frustration, I am learning quite alot. Having many preconceptions broken, getting to play with some pretty cool equipment, and really enjoying all of it.

I'm also getting a little more involved in my program than I thought I would. I volunteered for class rep (mostly because people were not eager to volunteer for the position), so I am second of two class reps that have to go to about 3 meetings a year. Should be interesting.

My favourite labs so far have been the hair and fibre ones. Not to get too technical about it (because I tend to rabbit on about it when I do), there are some microscopes which fire UV light at the fibres which makes them glow different colours depending on what kind of fibre they are. There's a kind of rabbit fur which glows red... very cool. There's another microscope which uses polarized light (like in your sunglasses) to make the fibre glow different colours, and based on those colours it is possible to tell approximately what type of fibre it is - they use this in geology too. I got to use the comparison microscope to view two fibres side by side and try to match unknown fibres to known ones.

My absolute favourite lab was using the ESDA. It's a machine on which you put a document, lay film over it, then sprinkle toner on. The toner collects in any indentations that are in the document (say, from someone writing on a piece of paper over top of it), and lets you see what marks are there. We had to go through different kinds of pens, paper, and pressures of writing, then finally tested an unknown document. The message on the unknown document was definitely a confidence booster when up until this point you feel like you're doing everything wrong. I didn't keep my ESDA lifts though (basically contact paper is layed over the toner and the film cut off to form what basically looks like an overhead) because they were pretty dirty.

The labs I've hated the most are the GRIM (Glass Refractive Index Measurement) - the general concensus among staff and students is that GRIM is a very fitting acronym. It's basically a system that looks like you could play pong on it. Any sudden movements and it freezes, something I managed to do twice. I mean, my Windows 98 system still runs faster than that computer. Anyway, I didn't get any workable data, and need to do a late submission using a classmates data... but we get two tries on every lab, so it's okay.

The other lab I hated was comparing toolmarks using a comparison macroscope (like a microscope only lower magnification). This is hard! Two hours staring through this thing and I only felt remotely comfortable matching one set... and I might still be completely wrong about it. However, this is something that takes years of experience and training to work with, and really the point was to show how difficult it is, and how the comparisons are very seldom neat and pretty.

Anyway, enough of labs. Last night we went to the International Students pub night. It was alright for the first little while, but then it got really crowded and the volume of the music started going up and up. So by the time we left our ears were ringing. I don't think I'm going to go to another one of those. The only fun was hanging around with the flatmates and with some of the guys we went to Edinburgh with.

Friday we might be taking a break from beer and a burger to try some place new. We love the Counting House, but routine can be a killer. Anyway, enough of me rabbiting on about nothing. Another busy weekend coming up (got to grocery shop and do laundry), and then a busy week next week.

Sounds pretty interesting. I'd imagine that it is nice to be doing something a little more practical ... in that it directly relates to what you are going through for. Not that I know what I'm talking about, but matching fibers and such sounds cool and ... er, practical.

You're picking up some lingo? Rabbiting on ... that's a new one for me.

I sent you a gmail invite, lemme know if you miss it becuase of your out of whack quotas.

Meh, CSI, I think that you should tell people "X-Files" because it sounds even cooler (though do kids these days even know about The X-Files? Am I dating myself?) I think that your classes sound super-interesting. And you're a keener, so you'll get the hang of things really quickly.

It seems like you're having so much fun in Edinburgh, and that you're enjoying your roommates (British translation: flatmates). I've found that when you get a bunch of girls living together, there's inevitably drama, so it's great that you guys are getting along so well. And how frigging amazing does your sweet potato pie look?!! Not fair to post pictures of your amazing cooking unless you're willing to share--so feel free to mail a few slices over.

tee hee, except I'm in Glasgow, not Edinburgh. ;-) Don't worry, a lot of people make that mistake... Glasgow wasn't exactly the place to be 10 years ago, and I don't think it's shaken the rep yet.

And on that note, you wouldn't believe the public drunkeness here! Just walking to the train station (to pick up a friend of a flatmate who's visiting) and back last night we ran into 5 or 6 (not all together, each at a time) stumbling drunk people who felt the need to give some sort of unsolicited advise or comment to us. And it was only around 10 pm! Crazy!