Today Lesley, Shabnam and I took the underground over to the west end of Glasgow. The Glasgow underground is incredibly easy to navigate. It's £2 return to ride, and it just goes around in a big circle. You can either take the Inner Circle, which goes west, or the Outer Circle which goes east. It took us only 10 minutes to get to Kelvinhill, which is where Kelvingrove Park, Kelvingrove Museum and Gallery, and the University of Glasgow is.

That said, the underground is also a little scary to ride as well... for me anyway. Given that the only other "underground" I've ever ridden is in Toronto, and is not really all that much underground, this was a new experience for me. The platforms are, by and large, tiny. When the train comes in the wind picks up on the platform and the very small train (tall people mind your heads!) comes in with a roar. Once your on, you blast through the dark tunnels that seem to have only 6" of clearance around the entire train, with the cars swaying side to side. But, it is a quick, cheap, and presumably safe mode of transport around the city.

Walking around the west end was like being in a completely different city. This is completely strange when you come to the realization that you're only 2 miles from George Square. The west end has a reputation of being the more posh end of Glasgow, and I suppose it is to a certain degree. But going over there I am lead to believe that it is more a leftover of the time when Glasgow was quite a bit more rough around the edges. The west end simply got cleaned up first, and Glasgow central is certainly catching up. 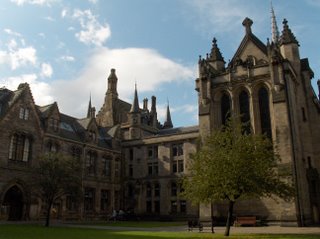 After wandering around the University we went through Kelvingrove Park. The park is very pretty, very green and full of trees. The River Kelvin runs through, and you can cross over it by foot bridge at several points. You might remember Lord Kelvin, who invented the Kelvin scale of absolute temperature (c'mon science geeks, don't let me down!) and who's alma mater is Glasgow University. Anyway, the title of Lord Kelvin, if I understand it correctly, is actually named after the river and not the other way around.

Facing Kelvingrove Park is Kelvingrove Museum and Gallery. This is a massive museum which was completed in 1901. The building actually backs Argyle Street, which has lead to the myth that the building was built backwards to spite the architect. The myth has it that the architect was so distraught he jumped to his death from one of the towers. This isn't true. The truth is that the museum was built facing the park intentionally, and in part because the 1901 International Exhibition was held there. In 2003 the museum was closed because the blond coloured stone had become black from coal dust. The stone was cleaned by using a rubber compound to coat the stone, which once pulled off pulled the coal dust with it. All the artifacts had to be moved out at the time, but some of the larger ones like Sir Roger the elephant and a giraffe had to remain and have special enclosures built around them.

At the Kelvingrove Museum, admission is free. There is also 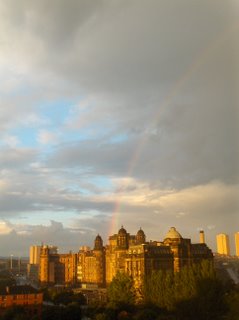 way more to see than you can in an hour or so. There are rooms devoted to nature, women's rights, Scottish art and history, just to name a few. There is also a cafe, kids area, small reference library, and a massive organ which plays on certain days. We're hoping to return to hear that in the not so distant future.

The weather was beautiful today, but we arrived home just before it started to pour rain. I got a great picture out my bedroom window of a rainbow coming down over the Royal Infirmary (right). Tomorrow my classes start in ernest, and I will be putting my nose to the grind-stone. I do plan on seeing more of Scotland and Glasgow, but school is going to have to come first... at least for the next little while.

Anyway, I've uploaded pictures of the west end trip to flickr. You might notice that I've taken many photos off of flickr. This is because my flickr account has a limit of 200 viewable photos and rather than just have the most recent photos visible, I thought I ought to just leave up my absolute favourites from my past trips, and have room for new ones. Anyway, go over and take a peak.
Posted by Erin at 3:28 PM
Labels: Scotland 2006-2007

Hogwarts Express.....actually really "The Jacobite" and it runs across the viaduct (which was shown in the movie) which is in the background from the monument to Bonnie Prince Charlie on Lock Shiel at Glenfinnan. We climbed up the monument (windy staircase inside) and crawled through a hatch and had a superb view of the Loch and the viaduct. The train was under repair when we were there so we couldn't go for the ride, but it runs regularly on a sheduled route. There's a great little museum and cafe there too.

ha cool! Thanks for the travel advice, I will be sure to check that out!

Oh, sorry....that would be me that was "anonymous". Gotta get the hang of this new posting.

We were at the Wallace Monument but were running late and didn't go up it. That's in Stirling and the castle there is supposed to be quite "fantastical" !! We went to the big wheel on the canal at Falkirk instead - the guys had been "castled out" at that point!

Hey Erin! I finally got a chance to read your post here and that's awesome. The underground does indeed sound scary. In Germany there was a lot more clearance and although the trains squeaked and protested most of the time it was very safe to ride.

It's Wednesday today and it is POURING rain. This morning both Nina and I were rudely awakened by thunderclaps and bangs as well as lightning all one after the other. There was hardly a break for about 30 minutes before it moved off. For a moment I thought we were getting tornado weather. Thankfully no. Right now we're getting a repeat of said even and it's pouring outside. I had to throw out your Hyundai umbrella because it was broken. I'll get you a new one. But for now I have no umbrella! eek! Do you need an umbrella over there?

Love you lots! miss you tons!

I'm so jealous reading your blogs!! Scotland looks beautiful!!! It's on my list! And it sounds like you're having a much better time than we did that fist time away from home ;-)

Work is rediculously busy, but then what else is new? Married life is crazy...we bought our very own home! It's a cute 3 bedroom 2 storey detached in oshawa, close to mom's house (apparently I really like home ;-) hehe).

As a funny little aside, it's pouring here too!

Good luck with the start of classes!!

That rainbow is stunning. The University of Glasgow is stunning, and so are the castles, the fog, and basically all of Scotland. Have I mentioned yet how jealous I am?! I want to hear about classes next. Do you get to do cool forensic stuff? Is it CSI: Glasgow?

Meghan: Don't worry, I have an umbrella, and mom says the rainsuits are on their way.

Christy: Congratulations on the new house! Oh yeah, this is nothing at all like the Laurentian experience... though I don't see how that could have gotten any worse ;-)

Leora: Don't worry, you'll all probably get an earful this weekend. This has been a helluva week in terms of labs. I've just finished a load of stats I'm not even sure I was supposed to do. It's been crazy!