Remembrance Day/Armistice Day
Today is Remembrance Day and Armistice Day. I bought my poppy about a week ago. Whatever your political affiliations or beliefs, there are some things that are just worth taking a moment of quiet pause over. Tomorrow there's going to be a Remembrance Sunday ceremony in George Square that I'll likely go to.

Television
(and the Young Ladies' Knitting Club and Terrorist Society) 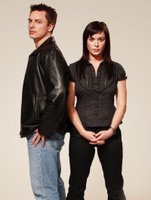 TV?? Who has time to watch TV? Well, there are a few things on TV here that I make time to watch. I've been watching Torchwood - which whoever knows me also knows that I've been eagerly awaiting this Doctor Who spin-off since it was announced - which has turned out to be a big success. It takes off from when Captain Jack was left by the Doctor and Rose on Satellite 5 after they defeated the Daleks. Watch for it on CBC in Canada when they get around to it.

I've also been watching a new series called Robin Hood which is really really good. I don't know if it is ever going to make its way to Canada, but if it does... or if you stumble upon it otherwise... it's well worth watching.

So, as well as watching TV in some of my spare time I've been crocheting. My flatmate, Lesley, knits, so it's not uncommon to see us both out in the living room with our yarn and implements of construction. I'm crocheting an afghan right now because there doesn't seem to be a huge market for cuddly blankets over here. But, there is a big and wonderful knitting and crocheting section in John Lewis over at the shopping mall. 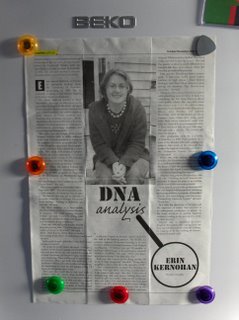 Look Ma! I'm in the paper!
Just wanted to thank Jerry Grozelle for the lovely article he wrote about me in the Highlands Courier. Here is a picture of it up on our fridge. I hope that us young folks from Minden keep venturing out into the world.

The Alarm Clock from Hell
Yesterday we all got woken up by the fire alarm at 3 in the morning. There is a klaxon in every room, so the sound is about the equivalent to what might rouse a coma patient. Anyway, we were back in the building in about 15 minutes. But it's a horrible thing to wake up to... not even because there could be a fire, but because the noise is just terrible... so a lot of people didn't really sleep good after that. Not fun if you have class/lab to do the next day.

When they told me that it rained a lot in Scotland, I believed them... but I don't believe this
Seriously, I thought, oh rain that's not so bad. But the rain in Scotland is of another breed entirely. There is something completely different about it. It falls in these massive drops, and I have a sneaky suspicion from the ground up rather than the sky down. Anyway, I walked out of the James Weir building last night into the gale and was soaked from the knees down in less than 10 steps. It was ridiculous. I've given up on umbrellas entirely. They just turn inside out and take up space. I'm all about hats and hoods now - much more effective. It is going to be interesting for our crime scene exercise in December. It is an all weather affair, so my game plan is rain suit and lots of sweaters.

My bathroom is literally too small to swing a cat in
Which I only mention because I now know that the smallest room you can swing a cat in is 2.5 m x 2.5 m. That is according to Brainiac... which is kind of like MythBusters only far less structured and with... well... less of a point. But it still gives me my useless science fix.
Posted by Erin at 8:09 AM
Labels: Scotland 2006-2007

Sounds good to me....lots of interesting things going on with you for sure.

When I was a little girl growing up in England, we used to have a Robin Hood series too. Richard Green was the actor who played Robin. Is this the real thing, or some kind of weird "modern" take on the story? (Like the Casanova series with Peter O'Toole as the older Giacomo relating his tales).

British rain and damp are forces to be reckoned with for sure. Have you got a Hot water bottle for bed !!!!!!!

Hi Erin,
I know it must be so difficult for you to find the time for your weekly updates.

I just wanted to let you know how much I enjoy reading them every week. It's a real treat. You have quite a way with words