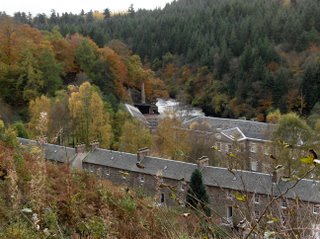 I was a little bummed out for a bit there, because I thought that with the hectic pace of my course, and winter setting in, that my travelling days were over until spring. Not so, however! My lab schedule has spaced out considerably, and this weekend turned out to be the perfect weekend to get out of Glasgow.

Lesley, my partner in crime, and I went on a trip to New Lanark with a group called "Friends International". They are a Christian group which plans tours and events for all the international students in Glasgow. Alot of the trips are day trips, and they are usually under £10. They are relatively unstructured, so you get to poke around yourself without having to see everything with a big gaggle of people. We also, by coincidence, met up with a couple of other students from our programme as well, so it was nice to hang out with some M.Sc. Forensic Science students outside of school. 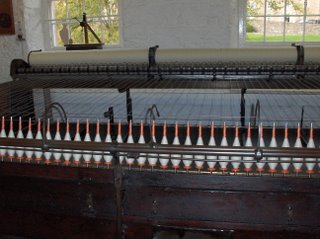 New Lanark is a small village on the River Clyde that was founded in 1786, and built around a cotton mill. Robert Owen, a co-owner of the mill believed in social reform and philanthropy, and was unsatisfied with the living and working conditions of the workers. In response to this he built the worlds first nursery school, and made sure that the millworkers had access to education and medical care. Owen's business partners began to feel he was wasting money on these efforts, and in response Owen bought them out. He was able to run the mill profitably while caring for his workers, and the village became the epitome of utopian socialism. At the time the village housed around 2,500 people.

It was still very very basic living. Up until the early 20th century a family only got a single room to live in. When electricity became available in 1898 there was only enough to power a single, dim bulb - and this was switched off at 10pm. Indoor plumbing was only installed in the 1930's. After changing hands several times, the mills finally closed in 1968. People started to move away and some of the buildings were demolished. In the 1970's a restoration project began and now the village is a thriving tourist attraction. Around 200 people live there now in rented and private properties.

New Lanark is a very beautiful place, right in the middle of a conservation area (click on the 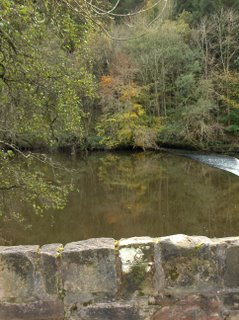 picture up to to get a bigger look). The landscape looks an awful lot like Central Ontario, with cedar trees mixed in with fir trees and deciduous trees. There are a set of rapids upriver from the village which powers the mills, which is where we spent most of our time. Lots of fresh air, which was a needed change from the pollution of the city. The Visitor's Centre is in a building that was once called "The Institute for the Formation of Character."

From there you walk along a link to Mill 3, where they have set up a ride called the Millennium Experience. This was a sort of kitschy time travel themed tour through the principle behind New Lanark - but it was still really fun. You got into this pod thing with a track over your head and were toured through an audio-visual presentation involving everything from mirrors and video screens, to mannequins with moving faces projected onto them. After the ride you walk down catwalks gradually making it through the exhibits down to the bottom of Mill 3 where there is a gift shop and coffee shop.

Now, I wasn't planning on buying anything in New Lanark, but I wound up getting a very cool souvenir. New Lanark still makes wool in roughly the same way it has since it was founded. They sell rather large packages of it for £10, which is a pretty good deal for wool in general. One of the colours they had looks much like the colours in the picture above. So my goal, after I complete the afghan I am working on now, is to crochet something using wool from New Lanark - which actually has the colours of New Lanark at the time I visited! 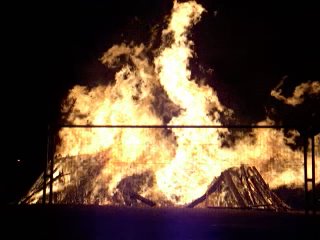 After touring around New Lanark we got back in the vans and went to a church in Strathaven (pron. "stray-ven") for supper. Tonight is Guy Fawkes night, and all weekend people are celebrating with bonfires and fireworks. Straven had a MASSIVE bonfire (the size of which would be considered a major safety issue in North America) and some pretty impressive fireworks.

Tonight there are fireworks at Glasgow Green, which I think the entire building will be going down to see. It should be really fun!

Anyway, I am going to update my flickr account straight away with pictures of my day out yesterday, pop on over and have a look!
Posted by Erin at 4:22 AM
Labels: Scotland 2006-2007

Glad to hear you have time to enjoy your surroundings. Weather isn't holding up here, Barrie got 50+ CM of snow the other day. There is talk about it warming up next week, so you never know.

That's funny that you said it, because I've often thought that parts of Scotland look like Canada. And apparently at one point, they actually were joined together in the same land-mass. And is it just me, or is Guy Fawkes Day a weird, weird holiday?

It is!! Though I've been told that they don't even call it Guy Fawkes Day anymore but "Bonfire" or "Fireworks" night. So, ever more the weirder, the UK has a holiday purely devoted to setting things on fire and blowing things up. :)

And where is Jason when you need him!!!zam

I've enjoyed your clean, accurate descriptions of both the situation at the University and your trips out and about. I've read a fair bit about Lanark over the years, but you really brought it alive for me. And the pix are really fine. The Return of the Native by Thomas Hardy begins the night of Guy Fawkes, with a brilliant description of the fires on the hills. When we were in Bristol, I was amazed with how big Guy Fawkes was for them -- but the struggles between the Church of England and the Catholics was an enormous part of British history. It really is like the struggles today between the Christian West and the Muslim world. Even to the extent that Fawkes was severely tortured before being executed with his fellow conspirators. Thanks for doing this Erin. Michael

Guess what I picked up an edition of the Highlands Courier in my mail at the library and opened it up and lo and behold there you are. It is the picture and article that Jerry Grozelle did about you before you left. The picture is great. I will see if I can get a copy of it to you via your mom and her care packages.

Hope all is well. Things have slowed here a lot but I am organizing and changing things around at the library. You won't know us when you get home.