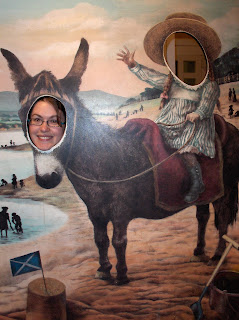 So, after our crazy two weeks, most of which was completely gray and rainy, Lesley and I decided to break out the cameras, on our first truly sunny day in a month, and go tourist on Glasgow. Our first stop was just across the street to Glasgow Cathedral, with the blue police callbox en route. There are 4 of these throwbacks to the 1920's and 1930's in Glasgow, one of which is a "Coppuchino" outlet - a coffee kiosk. Once victim to the march of progress, they are now protected by the Glasgow 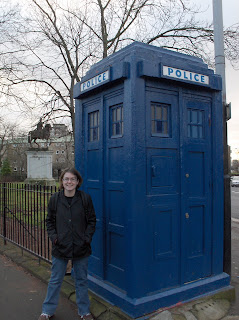 Building Preservation Trust and
the Doctor Who Society (no, I am not making this up if Wikipedia is to be believed), and kept to their authentic trademark design. The really hilarious bit is that they are actually now referred to as a "TARDIS" style police box. Again, I'm not making this up.

Then we walked down High Street, along Saltwater Street to Glasgow Green. The Green dates back to the 15th century, and throughout history has been the site of public hangings, demonstrations, and the final resting place of many very large artifacts including 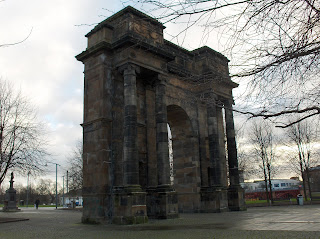 Nelson's Monument, and the McLennan Arch (right) which once served as the centre piece of the Assembly Rooms on Ingram Street before they were demolished in 1890.

Beside Glasgow Green runs the River Clyde, which divides Glasgow into north and south. The Clyde is a major river in Scotland, and the third longest. The Clyde is also home to some of the more dodgey places in Glasgow (as you can see below), and probably should not be visited at night. During the day, you're likely to pass quite a few tourists and locals making their way to and fro - but on the whole the walkway along the river remains fairly quiet compared to the shopping streets. Several large bridges span the Clyde, and boat tours can be taken down river to a massive shopping mall (and presumably the nicer end of the Clyde). Unfortunately the boat is out of the water until March, but when it goes back in I plan on taking a tour.

We walked pretty far down the River Clyde and when the sun began to set (which was still only around 2:30 pm), we decided it was best to begin heading north (especially after we passed a bunch of guys who looked a little mafia-esque). Then we headed up to George Square to check out the christmas lights, and to get ourselves beer and a burger at the Counting House.

And thus ended our great sunny day walking around Glasgow! More pictures, as always are available for viewing at my flickr account.
Posted by Erin at 7:22 AM
Labels: Scotland 2006-2007

Glad to see you were able to take advantage of your spare time. The panorama's are awesome!