Stepps is a very odd place. It's a small village on the outskirts of Glasgow, only slightly larger than Minden. Most notably, it houses the University of Strathclyde playing fields. But, every December, it becomes a hub for criminal activity, with no less than 8 crimes occuring all within yards of eachother. Each crime seems to be repeated every year, from armed robbery, to amateur bomb making, to drug crime. No one has quite figured out why this occurs, but it keeps the M.Sc. Forensic Science students busy for a couple of weeks anyway. 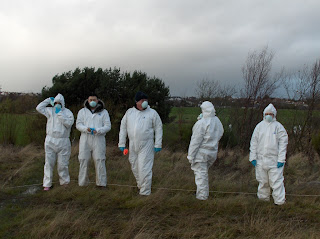 The Stepps exercise, or as it is formally referred to the "Crime Scene Exercise", is a crime scene to court experience in which we were split into groups and given each a crime scene to process outdoors, transport the evidence back to lab, and then analyse the evidence, and anymore incoming, for two weeks. At the end, we had to write a court report on the analysis we've done. In March we will be called to court by the Law students to testify. In the meantime, we may be called upon by the defense from other crime scenes within the exercise to do analysis as well.

Our day at Stepps playing fields consisted of trying to recover our badly burned cardboard victim in gale force winds that lasted all day. The winds were nothing that I've ever encountered before. Absolutely relentless! The wind just kept blowing and I found myself just hoping it would stop for 30 seconds so I could write my notes without my paper blowing all over the place. And then it would rain just enough to dampen the paper and make my pen run all over the place. And it was nuts trying to get in that white suit in that wind too... kind of like trying to put on a kite.

The subsequent two weeks was spent sifting through the evidence we collected, receiving more evidence from the "police" and doing analysis on the evidence we gave priority to. It was a big lesson in group dynamics, being thrown in the deep end without any waterwings whatsoever, and learning that a biologist and chemical-phobe like me can actually do chemistry when the situation demands it. It also made me seriously question whether this is the line of work I want to get in to. In the end, after all the stress and uncertainty, I still learned immensely from the experience and still want to see this all through to whatever end it gets me to. I'm also somewhat proud of myself because I demonstrated some serious perseverance in some of my analysis.

Anyway, I'm now putting the whole exercise aside for the holidays, and am refusing to worry about it until it comes up again around March. I have two more days of class left, and then I'm free for a couple of weeks! Yay!
Posted by Erin at 5:57 PM
Labels: Scotland 2006-2007

Wow, sounds very intense. I hope you have a good time over the holidays.

I told you you should make equipment that will hold up in any kind of environment :) like... non-leaky pens.. or paper that never gets wet... that or dries really freaking fast... :D