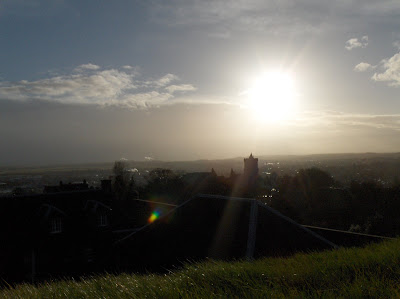 Lesley and I decided to go to Stirling before the two week stress-marathon that was to be the Stepps exercise. Stirling is a lovely little town... comparable to Peterborough, Ontario in size. It is home to a number of attractions including Stirling Castle, Mar's Wark, the Old Town Jail, and the William Wallace Monument. We unfortunately missed the Wallace Monument, but since Stirling is only 20 minutes north of Glasgow, and less than $20 for a train ticket, we'll certainly be going back.

Stirling Castle is really cool. Right now the Palace is undergoing renovation, but many of the other buildings are open. But just walking around the grounds and peeking in all the different passages is interesting. Stirling Castle is a Renaissance castle and was home to Mary Queen of Scots, and James IV, among others. The Castle was built as early as the 14th Century, but mostly 15th and 16th Century buildings remain. The outer defenses were built in the 18th Century. There's a certain vibe to castles, especially ones like Stirling Castle which have been kept true to their original style. They are massive, solid buildings that seem incorporate the out-of-doors and nature with their opposing man-made-ed-ness (yes, I'm really just making up words here). They were no doubt massive and busy places all of the time, decadent during the best of times, and downright frightening during a siege.

My favourite part of Stirling Castle was down in the cellars (I think they were cellars) of Elephant Tower where you could see fragments of the old spiral staircase and low ceilinged rooms. It was like spelunking without the claustrophobia, having to duck around columns and under low archways. Although it was all still above-ground (there were a number of low windows at about grass level), it had the feeling of being below ground... maybe because there was just so much above you.

We also stopped at Mar's Wark, which 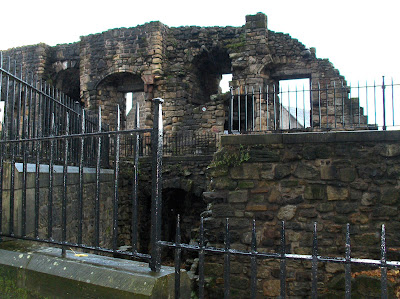 is the facade of a Renaissance Mansion. The mansion was never finished, and all that remains of it is the outside front, comprised of a number of low doorways (a testament to the shortness of stature of Renaissance Europeans), and windows. You can walk up into the graveyard behind Mar's Wark, and then along a little pathway to actually walk around what would have been the upper floor. From the upper level you can look below to the different rooms - what's left of them anyway. It is all very forlorn and spooky with everything covered in leaf litter and pop bottles carelessly tossed in by unappreciative passers-by.

A definite highlight of Stirling is the Old Town Jail. The jail was built in 1847 and was an attempt at Victorian prison reform. The focus was supposed to be rehabilitation and education, rather than meaningless drudgery and squalor. While it was still a far cry from 50 prisoners in a single cell with no food or water unless it was brought from somebody on the outside, it still fell back into the old penalties of being made to turn a crank that did nothing for hours on end, and picking apart pieces of rope coated in tar. You get 10% off if you've visited the Castle, and it consists of a guided tour with an actor. Afterword, you get to tour around a modern day exhibit of what prison life is like. The actor is absolutely fabulous, representing everyone from the old hangman to an escaped convict.

It was good to see your blog up and running again, and to know what fascinating things you've been up to for the last two weeks. I'm happy you've reconfirmed your stick-to-it-ness in the face of challenges and adversity. We've come to know and treasure that quality in you. I was also fascinated by the "actor" tour. The new F & A Associate has proposed that we develop this idea here, with a focus on graveyards -- scripting and using actors to bring the person in the grave alive again. We're very intrigued. She has done it in Niagara on the Lake, and we'll explore it for central Ontario. Glad you're back on line, Erin!