Just before Christmas Kate and I took a wonderful trip to the Trossachs with a group called Glasgow Friends International (the same group I went to New Lanark with). Anyway, the trip definitely earned them a link in my links section. If you're an international student in Glasgow and want to take affordable outings with a group of inviting individuals, then get in touch with these people. They are great!

bens (hills), lochs (lakes) and glens (er... glens). The Trossachs are also referred to as "the Highlands in Miniature" or "the Gateway to the Highlands", as it is where the hilly and loch-filled terrain of the Highlands begins. We began our trip by heading to Callander, where we learned how the original kilt was made. The kilt was made of a large tablecloth-sized piece of material called a "plaid", which was spread on the ground and then pleated. The wearer then sat on the plaid, laid back, and wrapped it around their waste, fastening it with a rope. The pleating effect at the back looks exactly like the modern kilts of today, and excess fabric above the belt was used for warmth, pockets, or protection from the rain. To the right you can see an example of a kilt made from a plaid, even Kate got in on the action and donned some female Scottish dress. 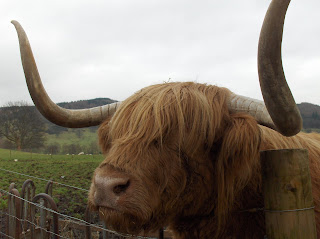 Just outside of Callander we stopped to say hello to Hamish, the Highland Cow. Highland cattle are impressive beasts with very large horns and a thick ginger coat which hangs in their eyes. They are built for a Scottish winter on the hillsides, taking the rain and mud in their stride. Hamish, unlike his hillside brethren, lives like a king near one of the distilleries, with ample hay, little mud, and a nice little shelter from the rain. But as they say, "heavy is the head that wears the crown", poor Hamish appears somewhat lonely when you compare him to the hillside cattle which have a nice little congregation for company.

We then traveled up to Balquhidder, stopping at Loch Lubnaig (pron: LOOB-nag) along the way. The hamlet of Balquhidder is home to the final resting place of Rob Roy MacGregor, notorious cattle thief and Scottish Robin Hood. It is also home to an old kirk whose ruins now serve as a heritage monument/landscaping feature. Rob Roy lay with his wife and one of his four sons at the door of this old kirk with the defiant epitaph "MacGregor Despite Them" - which while never fully explained, seems to have something to do with the surname MacGregor being denounced for the clan's participation in a bloody raid long before Rob Roy's birth. The epitaph was not put in place until 1981, along with a rail marking each grave - the headstones having been taken back by the earth and rendered unreadable.

The story of Rob Roy seems to have been heavily romanticized, with his character drifting from 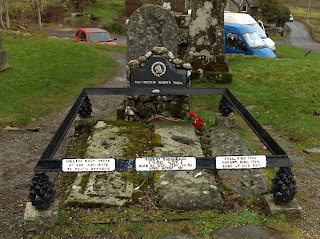 bully to benevolent outlaw depending on who is telling the tale. The historical facts include stories of betrayal, theft, revenge, uprising, secret alliances, royalty, mafia-esque extortion, and philanthropy. The question of whether Rob Roy was truly a Robin Hood for the Scottish Highlands, or simply a bully with an ax to grind, is openly alluded to in the introduction of the somewhat campy Rob Roy historical video we were shown in Callander. Like many things in history the answer seems to be a little from column A and a little from column B.

From Balquhidder we visited Loch Voil, and took in the scenery while walking down a rural road that snaked its way along the lake. The scenery of the Trossachs is eerily similar to that of the Haliburton Highlands, with me having to remind myself every so often that I was still an ocean away from home. The differences between here and home are incredibly subtle, being more a collection of impressions rather than list-able features. The forests of the Trossachs are mixed conifer and deciduous, with a higher proportion of pine and evergreens than back home. So even in winter, the forest still has the appearance of being lush and green. The trees are also more gnarly, growing in different directions with kinks and twists in the branches, rather than the young arrow-straight trunks that are more prevalent back home. The trunks here are also more likely to be covered with moss and ivy, while back home the lichens are still working hard at taking over, the moss still some years away from calling the trees home.

After dark, which has stabilized at a very early 15:48, we arrived in the small town of Killin and settled down in the initially chilly youth hostel. The hostel was very inviting, and old house with a large communal kitchen, big dorm-style rooms with very comfortable bunk-beds, and a cozy common room with a propane fireplace.

The next day we ventured out to Ben Lawers mountain, one of the many Scottish bens in the 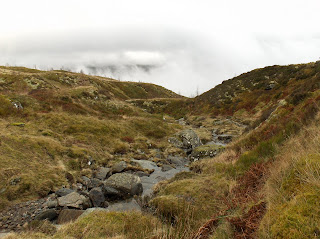 area. Hill walking is a sport in Scotland, the mountains being quite small and relatively easy to hike up. Here is where I got my first taste of truly Scottish looking landscape - or at least landscape that my poorly traveled eyes had not seen before. The mountains here rise just above the tree line, and are covered with scrub, heather (not blooming this time of year, unfortunately), grass, patches of trees, and rocky streams. It is difficult to determine which peak is which, because there are so many hills on the hills themselves. The streams add a pretty soundtrack to the outright remoteness of the hillside, as well as a refreshing drink. We were supposed to be able to see Loch Tay from Ben Lawers, but the rolling fog obscured our view. Despite this, walking the mist covered hills still had its atmospheric charm.

Another interesting thing about the Scottish bens is that they are used for livestock - mainly sheep but also Highland Cattle. Looking up the side of the hills, which appear reddish in the winter because of the non-blooming heather, with green grassy patches, you can see the tiny roaming white dots that are sheep going about their business of grazing. 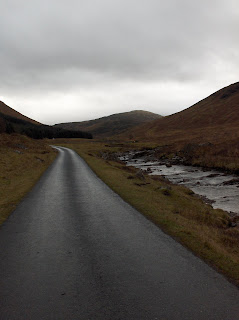 After Ben Lawers we drove along the River Lyon, and through Glen Lyon. Glen Lyon is a remote glen that cuts through the hills, navigable by a windy little road that is really only wide enough for a single vehicle. Hydro lines, sheep, and the occasional small house dot the hillsides. The hills are imposing, cutting you off from so-called "civilization" - in my mind, these quiet places are much more civilized than any big city.

Once through Glen Lyon, we stopped in Fortingall to see the old Yew. The Yew is estimated to be between 2000 - 5000 years old, and sits in the Fortingall Parish Churchyard. The ancient tree is 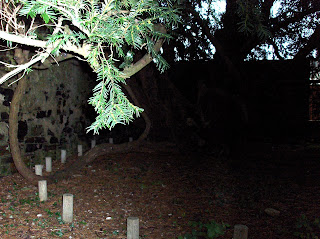 protected by a gated wall, the old trunk having been reduced from it's 16 m (52 ft) girth (marked out by posts) to many stem-like projections by over-enthusiastic souvenir seekers and vendors during the 19th century. Despite this, the old Yew seems to be in good health, with nice green foliage.

Our next stop was Aberfeldy for another scenic walk and a little shopping. Some of us opted out of the walk, wanting to warm up with a nice hot beverage. We stopped at a small coffee shop/bookstore/gallery for some excellent hot chocolate. Afterwords, we roamed around this pretty little town poking in the shops and buying some postcards.

Back at the hostel we had a Christmas dinner consisting of chicken, stuffing, vegitables, party crackers (complete with tissue paper crown) and Christmas presents. We also had a traditional Palestinian dessert made by one of our fellow travelers that I must have the recipe for... especially since it was just as good the next day for breakfast. 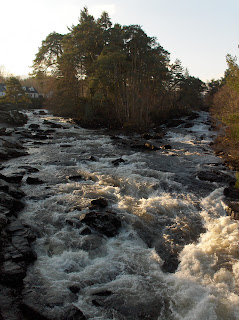 Our last day of travel sent us back towards Glasgow, stopping at the Falls of Dochart (pron: DOUGH-cart) - a set of impressive and picturesque rapids - before we left Killin. We then wound our way - past Loch Tay, Loch Lubnaig again, Loch Earn, and Loch Venachar (pron: VEN-a-car ; same tempo as vinegar) before reaching Loch Katrine, home to the Lady of the Lake and the steam ship named after Sir Walter Scott. Loch Katrine is where Glasgow gets most of its water, and has been since 1859. Loch Katrine is overlooked by Ben Venue, home of the Urisks, a tricky group of fairy people who like to play tricks on passers by.

Our final stop was in Aberfoyle which entailed a visit to the Wool Centre. At the wool centre I bought a couple of skeins of hand-spun Shetland fleece to make a scarf... another piece of Scotland for me to craft a souvenir out of.

It was great to get out of Glasgow for three days and spend some time in the fresh air of the Scottish countryside. I got to get to know my flatmate, Kate, a bit better and we are becoming fast friends. I also got to see some Scottish scenery that is very difficult to get to if you don't have a vehicle. I've posted a selection of photographs on flickr for your perusal - enjoy!
Posted by Erin at 9:24 AM
Labels: Scotland 2006-2007