So it was an interesting New Year for me. There were supposed to be many famous Scottish Hogmanay (New Year) celebrations last night, just about all of which were canceled due to some severe windy weather. Having already had a flatmate injured by some of these gales earlier in the month, I can say that the winds here are not to be taken lightly. As Ron White says "It's not that the wind is blowing, it's what the wind is blowing."

I partook in a Bolivian New Year's which consisted of wearing red knickers (pictured in my previous post), eating 12 grapes at midnight (one for each month and a wish for each), counting money (so we would have enough money in the New Year) and going up and down the stairs with a suitcase (so that we could travel in the New Year). My karma is now well and truly covered. 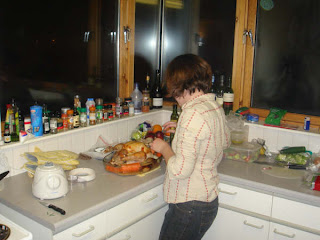 Overall, my Christmas holidays were very good, even though I missed home immensely. I had two Christmas dinners here at the flat, and then went to another downstairs. I partook in the madness that was Boxing Day. On Boxing Day I walked the streets with more people than I thought possible to fit on them, being bumped and jostled gently by the eddies of a flowing sea of shoppers. Despite the crowds, the atmosphere was much more relaxed than the impatient and stress-filled Boxing Day sales of North America. Here people were calm, and not once did I hear an ill word spoken.

I even bought myself some Christmas presents 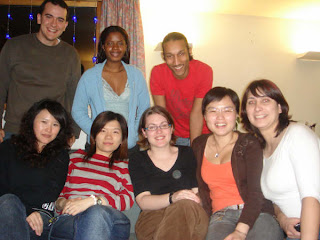 with money given to me by my family. And I even received some wonderful gifts as well. But I have to say that, although it is nice getting stuff, it was the well wishes that we all exchanged here in Scotland, and across the Atlantic to my family and friends, which meant the most.

Below there is another post talking about Kate and I's trip to the Trossachs with the Friends International. It took me a while to write that one between the making-merry that was going on here... but I finally got it all done.

And one final item of business before I get my nose back to the grind stone to study for my upcoming exam...

As part of my Christmas money I allowed myself to get one substantial piece of Doctor Who memorabilia, a 12" remote control Dalek :-) 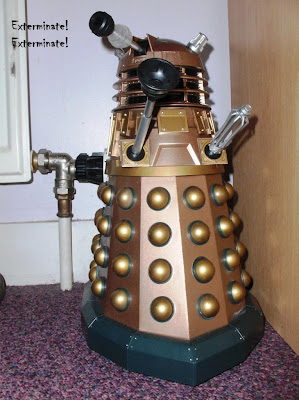 I love the pictures, especially the one of the hairy coo. I was a little scared to get close to them, but you went right up to that one big guy, eh? And the Bolivian New Year traditions sound great. I know for next year!

Merry Christmas and a happy new year! As my partner in crime I am glad you see you are representing Minden with all your crazy adventures.

Now I know why I don't have any good luck....counting money, going up and down stairs...I should have known.

Okay, that Dalek looks pretty amazing! I can't wait to see it in person.