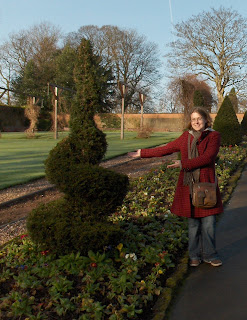 It's been awhile since I last updated, so the following is going to be a mishmash of seemingly miscellaneous stuff.

Our exam marks came in the wee hours of Thursday morning, and I passed first semester. Yay! I managed a solid 63 on my exam, which over here is "with merit". Above 70 is "with distinction". Before the exam I was aiming for my usual 70+, however right after the exam those expectations plummeted to only hoping for a pass. I was completely overwhelmed by the 4 essay questions, something I had never encountered before in an exam. So, I am happy with my 63, and in conversations with others I find myself firmly within the middle of the pack, which is a good place to be.

Looking back at previous posts, I notice I really don't talk that much about what I'm doing at school... and there really is a very good reason for this. School is not interesting. Now, don't get me wrong, I love my course and I'm really really enjoying it. But I guarantee you that me rambling on about court reports, PCR reaction mixtures, and acid phosphatase, is only good for putting you into a deep slumber from which you may never recover. But, since most of what's happening on this side of the pond is school, I realize I'm going to have to inject some sort of educational commentary into this blog. At any rate, you've been warned. ;-)

Second semester started with bloodstain pattern analysis, the highlights of which found me spitting into a beaker, and decked out in a scene-suit covered in cow's blood. Spitting into a beaker was to test saliva and blood mixtures to see if the presence of one confounded the test for another. The cow's blood thing was more interesting. We got to go upstairs to the (freezing cold) reconstruction room and spray, drip, and kick around cow's blood to see what kind of patterns we got. One exercise involved donning a tyvek suit, visor, and gloves and punching into a sponge soaked in blood, and then kicking it, to simulate what might happen if someone is severely beaten. It was pretty fun, and instructive, though kind of gruesome - but, it was only cow's blood... the same stuff they make blood pudding out of... though I have to admit the thought of blood pudding puts my stomach off way more than the exercise did.

Now we're doing DNA, which is pretty dry. But I'm finding myself very well equipped from what little I retained from my undergrad. Myself, and a couple of other girls, find ourselves tutoring some of our classmates with a chemistry background (who came over to the dark side of biology, mwah ha ha ha ha). This has been a huge benefit to me because it is helping me remember information and concepts which I thought I had lost, and bouncing stuff off of those who have a similar background as myself is also helping to solidify concepts which were iffy for me to begin with. I am coming to the realization that my undergrad may have been an unusually difficult one for what we're doing there. When I tell people that I have a Molecular Biology and Biotechnology Specialization degree, the response is usually "Oh dear God, why?" And quite honestly I can't give all that great an answer to the question aside from that I really do enjoy it, despite it being an insanely exacting and frustrating science. Hrm... I think there is a word for people like me... or several. ;-)

The DNA module finally caused me to buckle down and buy some textbooks. I have come to the interesting realization that the more gorey pictures found in a forensic science textbook the less useful it seems to be. This became readily apparent during the bloodstain pattern module when the book that was least informative had really icky pictures of people with their heads missing (for a variety of reasons), and the book that was most informative had zero gorey pictures. Leads me to believe that academia is not immune to sensationalizing. The really good bloodstain pattern book had neat-o time lapse photos of blood drops hitting surfaces so that you could see what the drop actually does to make the pattern you wind up seeing. Anyway, that's all a bit of a tangent because I didn't get a bloodstain book. I wound up getting a couple of general criminalistics books, and a big heavy DNA one... since DNA is mainly what I'm interested in doing.

DNA's been pretty fun. We're analyzing our own DNA, taking samples from buccal swabs, drinking cups, chewing gum, cigarette filters (sans cigarette) and blood. For the blood we used lancets that diabetics usually use to test their blood. OwA! I would not want to do that every day >.<. Last week we checked if the samples we extracted from actually had usable DNA in them, and so far 2 of mine do - the chewing gum and the swab. But I haven't gotten my blood sample results back. It's fun looking at your own DNA :-). 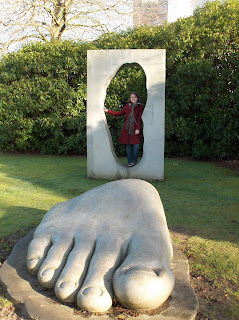 Last Saturday I went out with Glasgow Friends International to House for an Art Lover. Unfortunately, it was rather dark in there, so I didn't take many pictures - and quite honestly the pictures would not do justice to the house. The concept of the house is an interesting one. It was designed by Charles Rennie Mackintosh and his wife, Margaret MacDonald for a contest run by a German design magazine in 1901. The entry had a number of technical problems with it, including being late and having one or two drawings short. However, the judges loved it so much, that they awarded Mackintosh a non-placing prize for his entry, and refused to award a 1st prize to any other entry. Although Mackintosh gets the most credit for the design of this house, his wife's contribution is unmistakably equal to his own. Many of her signature art pieces are immediately associated with Mackintosh's name.

The house was built in 1996, based on Mackintosh's entry, in Bellahousten Park in Glasgow. The park is in the west end, south of the Clyde. In the park there is also a small ski-hill with artificial snow, a walled flower garden with some spiffy looking trees, and a rather large foot sculpture, among other oddities.

It's the coldest here that it's been since I came over. For the first time I have my heater on full, and am wearing more than just a t-shirt and cardigan. We're sitting at around 2C with a windchill around -3C. With the dampness it probably feels a little more akin to -7C. The buildings here are very poorly insulated, with my curtains rustling every time the wind blows against my closed window. My bathroom, because it is bordered by the elevator shaft (which has almost full exposure to the elements), and outer wall, could at this point be used to store chilled beverages. Given our lack of fridge space, this may not be a bad idea.

But really, it still isn't that cold here. Especially in light of the stupidly cold weather that Ontario has been getting of late. -3C, even in the damp weather of Glasgow, is not -43C (with windchill). Nonetheless, I am making sure to keep warm.

Given my friendship with my Alaskan flatmate, I couldn't resist passing this Penny-Arcade comic around.

Class moral seems to be pretty good. Recently we had a Biologists v. Chemists football match (I just supported... football is very much not my game). Chemists won 8-6, which wasn't too bad... considering the biology side didn't have enough players and needed to recruit some informatics students. Not sure what the next challenge is going to be, but I've heard through the grapevine it might be bowling. I could handle that. Last night we had a pub night which turned out good (considering I planned it, and hate planning things in general).

PCR both rocks and rolls. If you get the chance, read the autobiography of its developer, Kary Mullis. He's absolutely bonkers. He admits to doing drugs, including acid, he's a surfer, total womanizer, writes about his UFO experience, etc. Fantastic read. I think his book is called Dancing Naked in the Mind Field. And reading about the blood makes me feel sick, even over here. I have no idea how you'll be able to do it for real, with human blood. You must have a strong stomache!

congrats erin on passing your first semester. sounds like this semester so far has been really interesting. no news on library expansion yet but rd lawrence place is in fundraising mode and plans are being made for the start of construction. things are quiet here in library but they usually are january, february