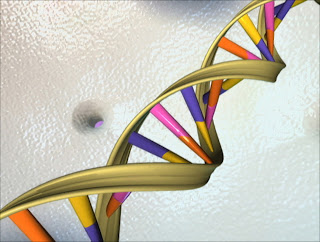 A couple of weeks ago our lab exercise was to extract and profile our own DNA. Part of DNA profiling is determining how frequent your particular profile - which is only looking at a small segment of your very large genome - occurs in the population at large. Since it is impossible to profile every person in the world, his is done using databases of volunteers who have had their DNA profiled.

I calculated my frequency using the RCMP database, and it turns out that my profile turns up 1 in 1.7 quintillion. That is, the probability of anyone else having my DNA profile is 1 in 1.7 quintillion - or that out of 1.7 quintillion people my profile will turn up only once. Even though this number sounds insanely large (and it is... wanna know what 1 quintillion looks like in pennies? My classmate put me onto this), it does not seem uncommon to be that "unique". Odds are, my sister and brother with whom I share half of my DNA, are also that "unique". My flatmate is also 1 in a quintillion, and my other classmate is 1 in a quadrillion.

So now, when someone says to me "Erin, you're one in a million." I can prove just how much of a geek I am and say "Actually, I'm one in a quintillion."

Hey I always knew you were extra special. And I think so does Carol. You take care.