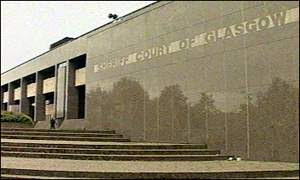 So, back in December we did the Stepps exercise, in which we were given a mock crime scene out in the elements to process from start to finish in two weeks. Thursday night we had to perform our final duties for this case by presenting evidence in a mock court of law.

I've never been big on public speaking. I get the jitters, especially leading up to a presentation or the odd amateur play, but once I'm up there I tend to be able to calm myself and get comfy in front of an audience. This, however, was thoroughly uncomfortable. Something about not quite knowing what nuanced questions are going to get thrown at you is very off-putting. Then, the added knowledge that exactly how you answer those questions will have a profound impact on one or more people's life - even in this pretend scenario - makes it even more off-putting.

The whole experience was an interesting one. In the evening we walked down to the Sheriff's Court across the Clyde. From there, the expert witnesses were shuffled off to the witness room, to be called one at a time by the lawyers (very And Then There Were None). Of course in this situation the expert witnesses were the forensic science students, and the lawyers were law students. Any forensic science students who weren't giving evidence were cast as jury, accused, clerk and macer.

In the witness room we were briefed on proper courtroom procedure: call the Sheriff (a real Sheriff's Court Judge) "My Lord", stand in the witness box, receive the question from the lawyer and address the jury with the answer, and then exit once instructed to do so via the gate by the dock and sit behind. Whether the gate was a push or a pull was something we made sure to clarify, to the point where we all filed out of the witness room and tested it ourselves.

It was a pull.

And this is very important to know.

When you've just been released from an adrenaline producing experience and you're eager to release your wobbly legs from their duty of keeping you standing, the last thing you want is an I Love Lucy moment flipping over a closed gate because your momentum realized too late that is was a pull rather than a push.

I was second from last to give my evidence, and was only up for half-an-hour (which was the maximum time for a 3hr mock trial with 6 witnesses, crown, and two defense teams). My nerves actually worked in my favour and forced me to consider each question carefully and ask for clarification or time to think. Despite how nervous I felt I've been told that I seemed very calm and collected.

At the end, I was surprised at some of the things the defense said about my testimony during their closing statements. They brought up evidence in my report that they had not questioned me on, and they actually said "Miss Kernohan said that..." and proceeded to say something that I did not say. But, at the end when the Sheriff addressed the jury, without mentioning specifics, that no matter what the lawyers said the evidence is what they heard the witness say. It was amusing to see the lawyers tripped up by the composition of the jury. The reflex seems to be to say "Ladies and gentlemen of the jury." The jury was all ladies so the sentence came out more like "Ladies a... of the jury."

One of the defense lawyers was very smooth with words, opening his closing statement with "Mr. Brown sits here an innocent man." That was the only moment that it sounded like a Law and Order Episode.

In Scots law, a jury can issue a verdict of not guilty, guilty or not proven. In our case the verdict was not proven. At the end the Sheriff addressed all of us and said, in particular to the women in my group, that we handled ourselves well.

So, the experience has been a good one. Every Thursday for the next three weeks we're headed down to the same court so that the other groups can have their mock trials. Even though going first was tough, it's nice to have this not hanging over my head.
Posted by Erin at 7:09 PM
Labels: Scotland 2006-2007

That's so interesting! Good for you for being cool and collected. Weren't you tempted to do a little "I want the truth!" "You can't handle the truth!" thing when you were testifying?

And I wonder if Scotland has any laws against double jeopardy, trying someone again for the same crime if the first verdict was "not proven". Good for you, man! I always knew you were one in a quintillion.