Ah, the semester is finally over. I just finished my exam, indulged in some Chinese Buffet goodness with my classmates, and drank wine while watching Peep Show (a British Comedy... not an actual "peep show"). Now it's time for the MASSIVE HUGE and GIGANTIC update which school has torn me away from for so long. So, here's a whistle-stop tour of my March, April and May. I figure a post or two a day should get me through it before I leave the country... then you might notice a few changes to the ol' blog... stay tuned!

In March (my God! March??) Lesley's son, Eric, came over from Colorado for his spring break. I tagged along with them for a trip up to the Highlands. It was only a day trip up to Inverness, which made for a whole lot of breathtaking views of inside the tour bus... but the driver was fun, and we basically received a running commentary of each leg of the journey for a good 4 hours there and back.

First we stopped at Loch Lomond, billed as one of the prettiest lochs (not lakes!) in Scotland. It is very pretty, with Ben Lomond towering over it. After seeing so many Lochs on the Loch Tay trip, however, Loch Lomond seemed to me to be just like any other loch. 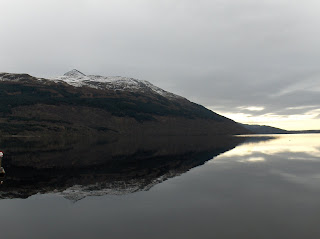 However, we did learn some interesting history while we were there. The song "The Bonnie Banks O' Loch Lomond" with the often sung chorus "O ye’ll tak’ the high road and I’ll tak’ the low road/ And I’ll be in Scotland afore ye/ But me and my true love will never meet again/ On the bonnie, bonnie banks o’ Loch Lomond." May actually be attributed to two prisoners, a young man and old man, who are charged with the task of determining who should be executed and who shall go free. The old man lays down his life for the young man telling him to take the high road, while he takes the low road of death.

While at Loch Lomond, I ran into a couple of tourists from back home. 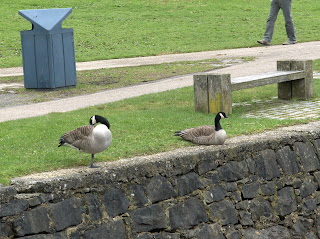 One of the big legs of the journey was through Glencoe, the site of the Glencoe Massacre of 1692, where the Campbells in the ultimate betrayal of Highland hospitality murdered the MacDonalds at the behest of William of Orange. Glencoe is another breathtaking glen, with a feeling as remote as Glen Lyon, which I had seen in December. Glencoe seems somehow bigger though, cutting through huge hills and dales. Standing in Glencoe you get the feel of being in a wide open space, while somehow being closed-in.

Glencoe was dusted with snow when we went through, and we were able to catch glimpses of deer feeing on the bits of grass sticking through. Every-so-often we'd drive through a flurry, which of course made me feel a bit more at home. 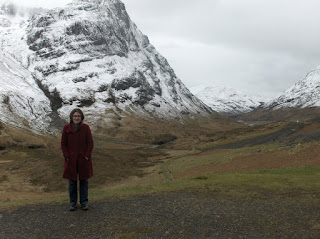 Once through Glencoe we were on the home stretch for Urquhart Castle and Loch Ness, home to Ogopogo's distant cousin, the Loch Ness Monster (or as they more sensitively call her these days, the Creature). Legend has it the creature was first spotted at Urquhart Castle by Saint Columba in 565 AD. Loch Ness is a huge tourist trap, with tours of the Loch by boat which aren't all that impressive - unless you like listening to a recording while you ride the choppy waves. Mind you, the unsettled water of Loch Ness certainly makes you understand why they think there could be a monster down there...

Urquhart Castle is worth the trip though. It is an impressive set of ruins, which on a good day would be fun to climb all over. However, by the time we got to Loch Ness, the weather had taken a turn from peacefully snowy to cold and windy. But, the weather only served to make the castle more atmospheric. 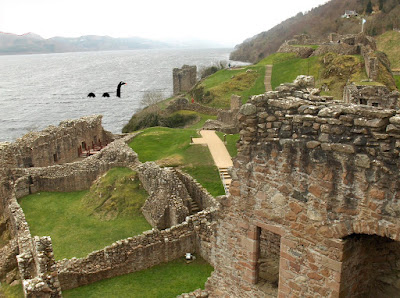 After our tour around Loch Ness and Urquhart Castle, we made our way back to Glasgow. Thankfully, I was soon going to get another - and somewhat more complete - taste of the Highlands.
Posted by Erin at 7:25 PM
Labels: Scotland 2006-2007

Glad you managed to have some play time, and not just all work. Looking forward to seeing you ... er, province-side.

Also looking forward to seeing you when you get home. Drop by for a visit and a chat.

Hahaha, I did a double-take at that Loch Ness picture. You so silly!