We had a party the Tuesday before the exam which we dubbed “The Last Supper”. We had a great time taking goofy pictures and whatnot. It was a great way to end off my time in Flat A-13. I’m definitely going to miss the girls… they are the best possible roommates that I could have wished for. 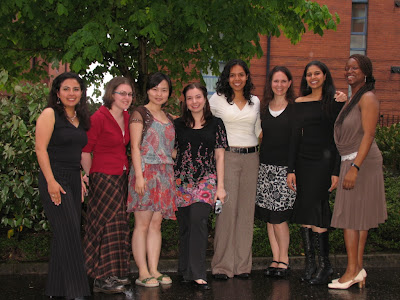 So this is what has put me so behind on my blogging. Well, that and the multitude of essays foisted upon us this semester! I think the exam went well. Again, it was 3 hours of straight writing, but this time I think I managed my time better. I stuck as close as I could to what I viewed the salient points to be, and did not stray. So much so that I wound up with an extra half an hour at the end to fuss over a question that in retrospect I probably should have passed over for another. I went through both my special left-handed pens, and another on top of that. After the exam the class went out to the Chinese Buffet for dinner, and a great time was had by all!

The day after the exam Lesley, and I took the tube to the West End to see the Botanic Gardens and to mail a postcard to the oldest pillar post box in at the .

The Botanic Gardens are beautiful and smell wonderful. The greenhouses have all sorts of interesting plants including orchids, tropical trees, and carnivorous plants. Outside there is an herb garden, rose garden (unfortunately not in bloom when we went), various interesting trees, and heirloom flowers.

After the Botanic Gardens we had a leisurely brunch at a church-turned-restaurant and then headed through to the of where we bought and mailed our postcards using the oldest pillar post box in . I sent my postcards to Dad and James… and I beat them home!

Monday there was a farewell tea for the class in our common room, and we spent some time running around the taking pictures. Then a bunch of classmates and staff went out to a pub for a drink. Then it was off to dinner with my flatmates for one last beer and a burger.