In April we got a week off for Easter, so I took the opportunity to catch up on some work, 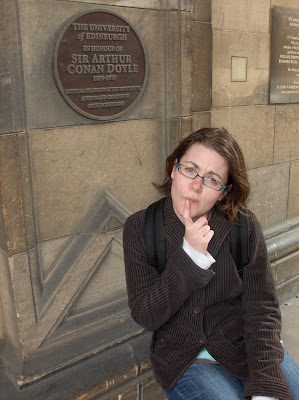 cleaning, and a little traveling. I took a quick half-day trip to with my classmate and flatmate Lili. Lili needed to get a visa to go to to visit one of her classmates – he had fallen ill and the doctors found out he had a brain tumor. He went straight home and had it operated on. He’s doing very well now, walking and everything, but has a little short-term memory loss. Scary situation nonetheless – to be in a foreign country and have a serious medical emergency.

is a beautiful city in good weather (recall back in November I went on a very rainy day and probably spent the time hypothermic). There is no shortage of green space in which to stretch out and relax. and I went to the art gallery but, neither of us being artistically inclined, didn’t really get all that into it. The pictures that spoke to me the most were the ones by the Scottish artists – in particular a painting which depicted an Irish man at a harbour in waiting to board the boat to . Couldn’t help but imagine one of my Irish ancestors in his place.

After Lili rejoined us by the art gallery, we went over to Edinburgh University and I took a picture of the plaque dedicated to Sir Arthur Conan Doyle – creator of Sherlock Holmes (for which I have a gradually expanding collection of strange memorabilia). Afterwords we walked up the Royal Mile and checked out the stores. Lili had to run off early because she had so much work to do, and and I went to the Deacon Brodie Café. The café is in what is believed to be the work shop of Deacon Brodie, a deacon of carpentry who was the inspiration for Dr. Jekyll and Mr. Hyde. By day he was a gifted carpenter, and by night he was a notorious thief and gambler, in the end hanged by the very gallows he designed.

After lunch and I walked around the base of the rocky hill/cliff one which stands, and made our way back to the train station. It was a short but nice visit to . 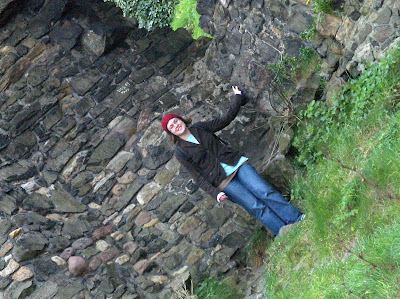 Not much to say here except that Ice (classmate) and I went over to Doug’s (another classmate) and had some fun playing with the Nintendo Wii. Very cool console. Generally spent the sunny day playing the Wii and watching Pulp Fiction. I seem to be better at tennis on the Wii than I am in real life... stands to reason if my golfing skillz are anything to go by.