I pretty much jumped at the chance to go to the again. I went with Andre (from ), Lili, and their friend (from , but with a Scottish accent… how cool is that!!?) splitting on car rental, gas, hostel stay, etc. It took us around an hour to find our way out of , but once we were on the road, navigation between myself and Lili was pretty straightforward, and Andre made driving on the opposite side of the road seem easy.

Our first stop was , but I didn’t see any Canadian tourists this time around. We 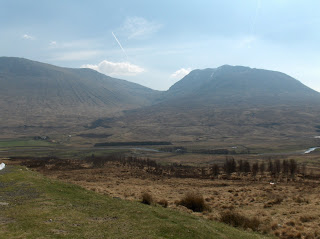 then went up through Glencoe, making an unintentional detour into . This time it was a breezy sunny day, and we stopped in a couple of places to enjoy the views.

Up around , we visited . The castle is in ruins, and accessible by a rather narrow road off the highway. It’s one of those iconic four turret castles, and you’re free to just go on site and wander around. The really fun part about the ruined castles is seeing the remnants of the normal everyday things like windows and staircases. You can’t help but try to imagine where that staircase went to, and who climbed up it every day. Another interesting bit about Inverlochy Castle was the pieces of timber stuck in with the stonework – not sure if those were original (seems unlikely in Scotland’s wet climate), part of an old attempted restoration, or modern. 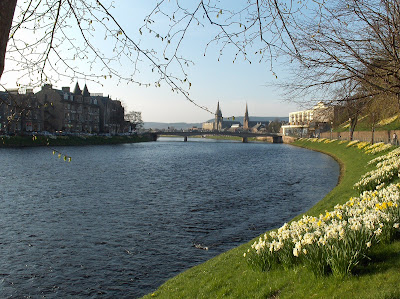 By the time we got up to Loch Ness and , it was fairly late and we decided to just head right up to for supper. We stopped at a tapas restaurant, and then walked along the River Ness which winds its way to Loch Ness. is a very clean and pretty city, still small enough to be (it seems) pretty close knit, but big enough to have all the conveniences.

Before the sun got too low on the horizon, we left Inverness for . This castle is now used as a youth hostel, though when we stayed there the main guests were families. This seems to be a result of its remote location, though it is only a distance from the train station. 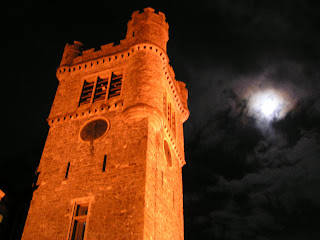 As hostels go, this could be considered the Ritz, but without the price hike. Tall ceilings, statues, art, and a massive reading room all make it feel very high-end. But, everything still has that run-down hostel feel to it. Still, you can’t beat sleeping for the night in a castle!

In the morning we headed out bright and early north to . So early, that we were there a good 45 minutes before it was due to open. So to kill some time we headed up to Brora, where there is a beach and golf course. The

golf course is a public golf course, meaning that all you need is you and your clubs, no green fees. To get to the beach you need to actually walk across the golf course, so watch out for airborne golf balls. The beach is on the , which when we were there was FREEZING cold… as Lili exclaimed “It hurts my bones!!”. After hanging around Brora for a short while, we went back down to .

I think I’ve mentioned before on this blog that I’m not too keen on the castles owned by the Scottish Trust. They are all pretty modern (late Victorian and early Edwardian), as families actually lived in them up until it became unaffordable. However, Dunrobin is proof of the old real estate adage “Location, location, location.” It is on the sea, with expansive back gardens. Inside looks pretty much the same as most of the Trust castles, but with more rooms open to the public (and I think one in the process of being discovered if my eavesdropping on the staff is interpreted correctly). As well, the castle is home to a falconry exhibit, where a number of rescued, and offspring of rescued, birds of prey are kept. 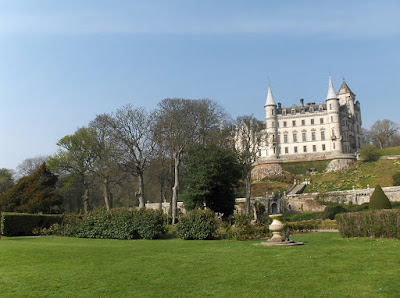 The falconry demonstration was the most fun I think I’ve had. Our falconer was extremely knowledgeable, and clearly enjoys his birds. He first introduced us to Plop, the white barn owl. Our first sight of Plop was on the perch in front of us, with the realization that he had gotten there by swooping over our heads, completely unheard. He demonstrated how owls are silent flyers, swallow their prey whole, etc. All stuff you learn in school or out of National Geographic, but way cooler when you see it in action. He let the children in the audience hold Plop… never have I wished so much to be a 10 year old again!! 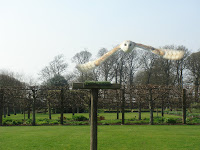 good their eyesight is, as well as pointing out the challenges that face a falcon’s survival outside those that man imposes upon them. He then showed us a younger male gyr falcon, and demonstrated how they can catch their food in the air. Unfortunately, this poor falcon hadn’t quite worked out how to transfer his food to his mouth on wing, and swooped up to the castle with it. It turned out to be a bad choice of dining area, as there were a ton of other birds up there vying for his snack. The falconer spent a good 10 minutes trying to coax him back with the lure. When he got his next snack, he took it to a quieter perch on the garden wall.

After , we went to Findhorn. At Findhorn there is a big beach that seems to stretch on forever, with a windfarm. The tide was out, so there were lots of seashells again to be had. Unfortunately my seashells got crushed on their way home in a packaged marked FRAGILE (a clear indication that post office personnel do not actually read those warnings), and were thrown in the garbage when they got to . L Also in Findhorn there is a hippy commune which the public can visit. Unfortunately it was closed when we got there, but we did get to see some of the groovy signage and the grass growing on the roof.

Then we went back down to Loch Ness so that Lili and could take the boat tour. I had already been on the boat (albeit in much less hospitable weather) and Andre didn’t have very good sea-legs, so we stayed behind and had a coffee at the Clansman Hotel. It really struck home again, what a tourist trap Loch Ness is. But at the same time it is still one of those things that you just have to go to if only to say that you did.

We went back into to check into another youth hostel. The youth hostel in is probably the best hostel I’ve been in. There are only 6 people per room, with lockers and hangers for your things. The showers were very nice (though lacked privacy), and the whole place was very clean and new looking. We then went out for a quick supper (a burger at a curry joint), and then went to hear some traditional Scottish music at a pub called the Hootenanny. 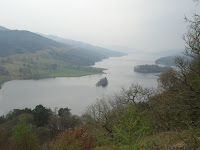 The next day we were at a bit of a loss of what to do, or which way to head home. In the end we decided to go via and Pitlochery, and to just veer off wherever we fancied. Our first stop of the day was Queens View which overlooks Loch Tummel. It’s a very pretty area, and quite remote on a little narrow windy road.

We then went to Edradour Distillery, the smallest distillery in . As it was explained to us, what major distilleries make in a week, takes Edradour a year to produce because they do everything by hand. There we got a free tour, and a free sample of their cream liqueur which was very nice. During the tour, t 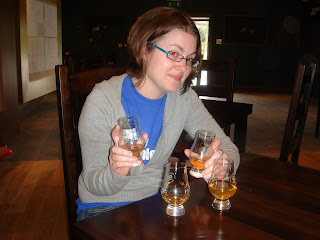 o my complete dismay, my cows laying down myth was finally put to rest (are you reading this, Mom?). The spent grains leftover from the distiliation process are spread on the fields as fertilizer or fed to the cows. So, in anyway, the cows aren’t laying down because it is going to rain, they are laying down because they are all tanked. Oh, and the picture? I promise those weren't all mine - though I did sample a very interesting unchilled filtered scotch which I actually (to my surprise) liked.

After Edradour we went to . The castle is 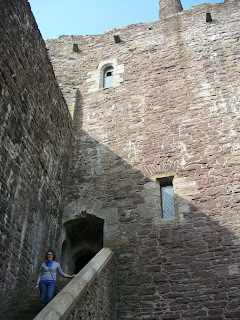 another castle in ruins, but with one very special difference – it is where they filmed a great deal of Monty Python and the Holy Grail. The only thing that I’d wished I had done before visiting was to re-watch the Holy Grail again and pay attention to the scenery, because as it turns out they used a lot of the castle interior and exterior. For instance, I actually walked down the same staircase that Sir Lancelot (John Cleese) ran up during his killing spree when he got “a little carried away.” (Not the same stairs in the picture). Doune is neat because even though it is in ruins, many of the rooms are still largely intact, including a couple of loos and some gigantic fireplaces.

After Doune we went to Loch Katrine – which I’d been to in December, and then Aberfoyle. By then it was getting late and all the attractions were starting to roll up, so we headed back to . What a great trip!