I finally went out with Kate, the girls and Andre (who was tricked into coming with all us girls because he thought our other friend James was going to go) for Chinese Hot Pot!

Hot pot is like a really big, and slightly more involved, fondue. You get a big pot of simmering broth in front of you with spices in it, a plethora of weird and wonderful raw foods, and a dipping sauce made up of sesame, soy and other stronger flavours, and you sit down and make your meal. You drop your food into the broth and let it cook, cooking and eating as you go. I enjoyed the thinly sliced meats such as pork and beef, but stayed away from the lamb (which I've discovered I don't like that much). I also liked the squid and fish ball, but stayed away from the prawns (which in the UK still have their eyes... so creepy). I was especially fond of the leafy green veggies.

I even attempted to eat with chopsticks. Kate was quite impressed with my l33t chopstick wielding skillz. Especially handling them with my left hand (which looks harder than it is when being viewed by a righty). 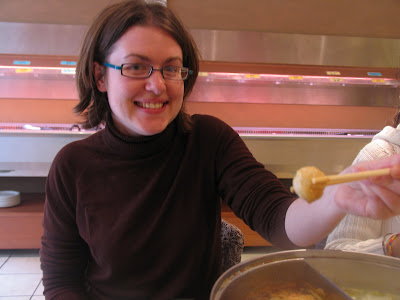