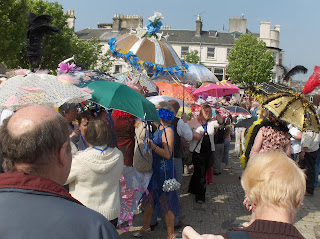 The weekend after we decided that another trip was in order and this time Lesley, Eleanna and I went to the Isle of Bute to see . The islands are extremely easy to get to – the ferry and trains all connect, so only one ticket is needed. We left from Central Station early in the morning to catch the train to (pronounced: “weems” bay), and then the ferry to Rothesay. Bute is a much more industrial feeling island than (which I went to in September), and seems to have a, if not larger, more congested population. We arrived in Rothesay right in the middle of a jazz festival, and got to see a number of very interesting umbrellas getting ready to march.

is all of two minutes from the ferry, and the town of has grown up tight against it. - built in the 1200s - is another castle in ruins, but this time it has the odd designation of being a round castle, and having a moat. Another thing about is that it is home to a massive amount of seagulls, all of whom appear sinister and mean. I wanted to walk along the whole moat, so I managed to walk behind the castle steering as clear as I could of the many nests. The seagulls, however, must be used to people walking about because they only gave me the evil eye as I passed. I still felt as though I was in a certain Alfred Hitchcock movie.

After the seagull ridden , we hiked 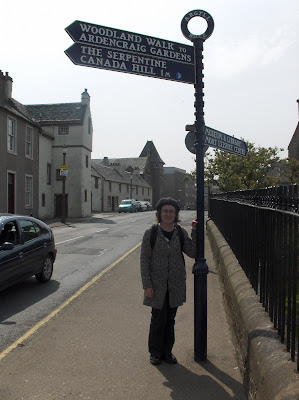 am told) because it was the place from which family members could watch the ships departing for North America for the longest before they disappeared on the horizon. Back in those days it may have been the last sort of contact they ever had with those loved-ones.

After hiking up and back down Canada Hill (we never did find the top… it’s a residential neighborhood and we didn’t want to risk trespassing on private property), we decided to grab a drink and then take an open air bus tour of the island. The bus tour was nice, but since is mostly farmland, that was what most of the tour consisted of.

It is not often that stopping for a bathroom break becomes a notable mention of a journey, but distinguishes itself in that regard. At the pier are the Victorian Toilets, for 20p (which is the going rate at most high volume toilets… 20p to pee) you may enter the very clean and nicely decorated washrooms. The women’s toilets are pretty simple, but across the hall you can catch a glimpse of the green marble of the men’s toilets, apparently visited by Prince Charles. For a fee you can take a tour of the men’s as well, but we opted not to.