On May 3rd, Lesley and I decided to head over to again and tour around. Our first

stop was at the plaque for Sir Arthur Conan Doyle again, where I took a rubbing of the plaque for my sister. Then we did the Royal Mile, looking for kilts for Lesley’s husband and sons. We made our way up to the Castle, and had lunch. Then we saw the 1 o’clock gun. I had hoped to get a picture, but I jumped when the gun went off and didn’t get a great shot. 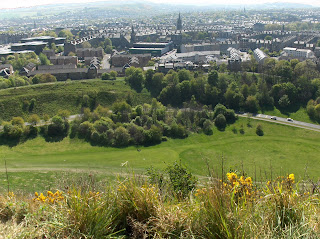 After the castle we headed down to the bottom of the Royal Mile to Arthur’s Seat. We hiked up Arthur’s seat, which is a good half hour of a steep incline. Once we got to the top and round the bend, we were greeted by the sight of a handful of people either lazing about or having a snooze. From Arthur’s Seat you can see most of , and the harbour. The hill is amazingly solid, and it is no wonder there were people up there sleeping – it feels very peaceful and quiet. We spent some time resting at the top of Arthur’s Seat, enjoying the sunny breezy day before descending and heading to the park by the train station. Lesley needed to do a security interview for her placement, so I was left to my own devices and at her advice decided to climb the .

Sir Walter Scott was the poet who wrote The Lady of the , a character of Arthurian legend 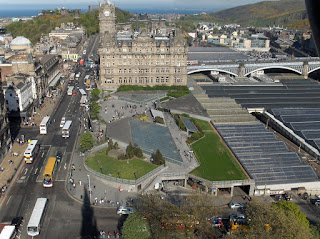 whom he transplanted to Loch Katrine in the Scottish Trossachs. The is in right by Waverly Station. It is a tall gothic looking thing made of porous stone, and as such has been stained black in places giving it an even more gothic appearance. The structure sits on four posts, one of which you enter to pay your ₤3 admission. You go up a tight spiral staircase to the first level where there is an interpretive exhibit detailing the monument and Sir Walter Scott. After that, the remaining stairs of the monument’s whopping 287 stair total is straight up in a single ever-narrowing spiral staircase. 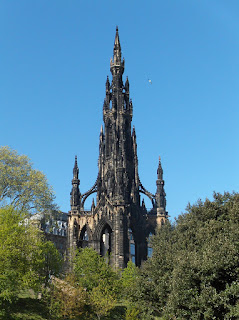 There are another 2 levels at which to stop before you get to the top, which make for a good rest if you are so inclined. As you go up the already small staircase gets smaller and smaller – I am surprised that people larger than I could manage. Once you get to the top you squeeze out of the, at this point, almost too tight stairwell onto a very small top platform with (thankfully) plenty of rails to hang onto. The view, unfortunately, isn’t great, and is dominated by Waverly Station. But the fact that you are so high up and on such a narrow precipice, makes it very impressive. After going back down I found Lesley in the park and, since she was still on the phone doing her interview, I decided to lay on the grass and have a snooze… I felt the need to be in direct contact with the planet for a little while.

After the interview we did the Royal Mile again, this time stopping for dinner at the Deacon Brodie Pub (across from the Deacon Brodie Café). After dinner, we walked leisurely back to Waverly Station and went back to to continue studying for our exams.

I'm ashamed to admit this, but the first time I went to Edinburgh, I didn't know where the castle was, so for the longest time, I thought that the Scott Memorial was it, until I went on a tour. I'm real smart.