This week I took a quick trip out to Sydney, Cape Breton to sit in on a meeting with the Membertou (First Nations) community and my supervisor for her 3-D facial reconstruction project. It's a project that I may be helping out with, so it was good to be able to see the some of the development that is behind a project of this magnitude. It was also interesting to see the cultural nuances that are much different from our own regarding these types of projects. The meeting was very interesting, and the people were all very friendly. I got to see some artwork done by some of the primary school children in the community, and was absolutely blown away by the level of skill exhibited by kids so young.

After the meeting we went to a restaurant and I had seafood penne... they do really good seafood over here. We didn't do much else in Sydney, since the meeting was the main mission. It's also a 4-4.5 hour drive out there, so it's a long journey. 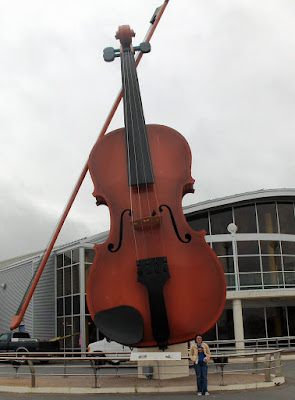 I did get to see the Big Ceilidh Fiddle at the visitor info centre. It's a giant 17 m 8 ton steel fiddle with a loud speaker in it that plays the same song over and over and over again. I could see how that could get annoying after awhile.

Yesterday I took the time to go out to the farmers markets in both Dartmouth and Halifax. Both are very good. The one in Halifax is in the indoor courtyard of the historic Alexander Keith's Brewery building, so is slightly more impressive than Dartmouth's which is in the same complex as the ferry terminal. However, content wise both are about on par, with the one in Halifax having the added bonus of a wine and spirits room. I bought myself a reasonably priced bottle of Nova Scotia wine in Halifax, and some bread and spinach in Dartmouth. Both markets are definitely dominated by artisans, selling everything from handmade beaded jewelery, to wood carvings, to tea cosies made from the Nova Scotia tartan.

The Scottish and Irish influences are definitely present in Nova Scotia, as well as some French from the Acadian culture. On my walk from the ferry terminal to SMU (short for Saint Mary's University) there is a Robbie Burns statue, I've seen hotel workers in the downtown wearing kilts, and there is a big Highland Games and Tattoo here in the beginning of July (which I am definitely going to attend).

Thursday night I went out to a pub across the harbour called The Lower Deck to hear some live music. The girls I went with said the band wasn't the best one there, but if they were the worst of them than the rest must be great because I thought they were pretty good! The pub is in one of a group of historic buildings on the Halifax side of the harbour which contain shops, restaurants and pubs. I had great fun, and since the pub is located right next to the ferry terminal, it was easy to get back to Dartmouth (though unfortunately I had to leave only halfway through the set). Also along the Halifax side of the harbour are a number of tourist attractions including a museum, tourist info booth, souvenir shops (pirates and lobsters are a bit theme), boat tours, fish n' chips stands, and a giant Theodore the Tug Boat where kids can look around and then sit on the dock for story time.

That's all that fit to print for now. Next weekend I'm hoping for warmer (if not drier) weather so that I can go down to Pier 21 and check out their genealogical records, and take in a few more of the harbour-side attractions.
Posted by Erin at 10:51 AM
Labels: Halifax 2007

I find it interesting that Quebec is pseudo-France, Alberta is pseudo-Texas, BC is pseudo-California and now I know that the Maritimes are pseudo-Ireland/Scotland. Is there nothing original in Canada? Other than the north, of course. (I don't think there's anything like Nunavet out there.) I wonder if this is a Canadian thing or if this lack-of-a-unique-identity is an international problem.

I think it is a function of the people who colonized and culturally took over the area. I'm not sure that even the States really has a "unique identity" (take the Acadian influence in Louisiana, Irish influence in New York, etc.) , nor the Latin American countries who have a clear Spanish/Italian/Portuguese influence. Even our legal system is based on common law taken from the old country.

That said, the entire Western Hemisphere did have a unique identity before Europeans muscled their way in... to find it now you really have to go looking for it.