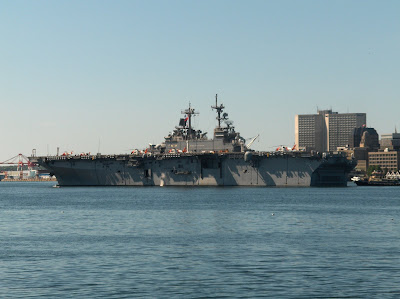 Last week, the USS Wasp pulled into Halifax Harbour to help with a joint hostage-taking simulation exercise with the Canadian Navy, RCMP, and other Canadian and US government agencies. The exercise started yesterday, with (according to the understandably few details in the local paper) the RCMP getting a call in about an off-shore hostage taking. The whole thing is supposed to take place in both national and international waters.

Since the whole thing is out at sea, there is really 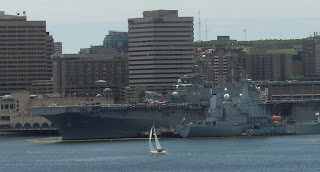 nothing to see here. However, I was keen to see the Wasp actually leave, seeing as I didn't see it come in. People who know me know that I am a total nerd when it comes to big moving things (after a few fraidy-cat false starts when I was a wee one). I don't mind being stuck at a rail crossing when a train goes by - I just think it's cool to be seeing the train, I look up when a plane or a helicopter goes over (living so close to the hospital helicopter pad in Minden is a constant source of joy for me), and big boats have now made it onto my list of cool things to watch. 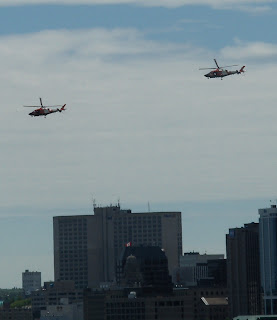 So Sunday I decided to take the day and spend it in the park overlooking the harbour with my book, waiting for the USS Wasp to truck out, heading off to rescue some "hostages". Not much happened on Sunday, and the 250 metre tall Wasp stayed in it's spot, dwarfing everything else in the harbour. But, I enjoyed the sun, breeze, and reading so much that I easily spent most of the day outside.


Unfortunately I forgot to put on sunscreen, so I now have a very red face.

Cool stuff did happen on Sunday though. Every so often when the wind was right you could hear announcements made over at the Naval Base. And at one point when I though I might go and leave, 3 Canada Coast Guard helicopters came flying over the park and landed on the Wasp, followed by 2 more half-an-hour later. (EDIT: My friend Aaron tells me that they were actually US Coast Guard helicopters, not Canadian... and upon closer inspection I agree. I didn't realize that the US Coast Guard colours were also red and white.)

I was a bit glum that I might have missed the Wasp's grand exit from Halifax Harbour, but 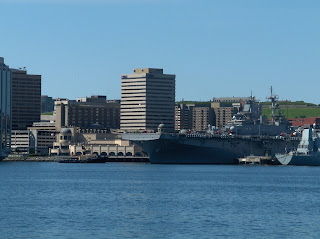 started to think it might sneak out under the cover of darkness or something equally James Bond-ish.

However today as I made my way down to the ferry terminal, I saw that the big yellow line snaking around the ship had been removed, and the tug boat was in place ready to pull the ship out. When the ship sounded it's horn, you could feel it in your toes. The Wasp and a number of Canadian Naval ships headed out, and were seen off by none other than Theodore the Tug Boat - how funny is that. 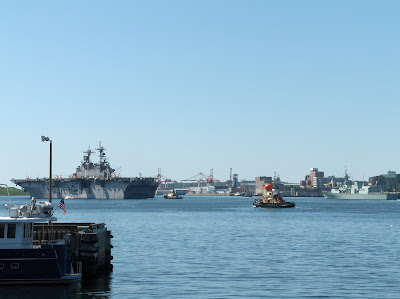 I've added links (to the right) to two webcams at Halifax Harbour for you to enjoy. The one facing south (out of the harbour) is a little more interesting. It is on the Dartmouth side, and the little triangular form at the bottom left is the World Peace Pavilion. The one facing north isn't quite as interesting, but a nice view with a light house nonetheless.
Posted by Erin at 5:36 PM
Labels: Halifax 2007