Look at all the boats! 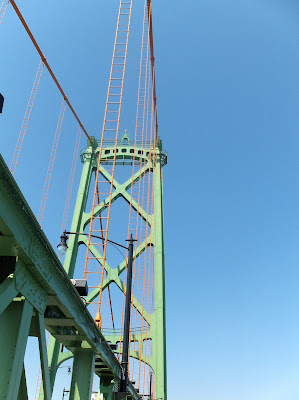 It's tall ships weekend in Halifax, and while I'm not all that taken by the tall ships themselves, it is neat to see the harbour so full of sailboats, tour boats, etc. I went to see Harry Potter: Order of the Phoenix, and then decided to walk over the Angus L. MacDonald Bridge rather than ride the bus over it. The day was so nice, I decided to snap a few pictures. 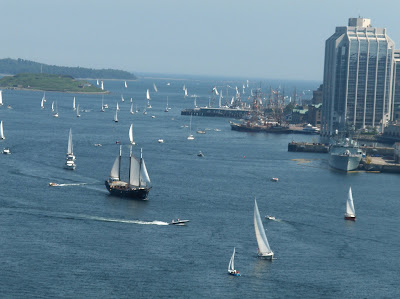 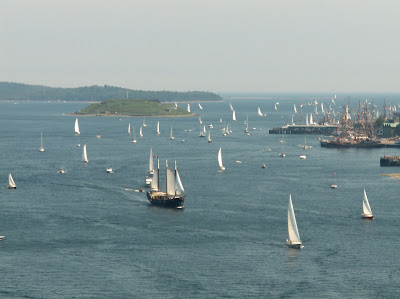 It's foggy again today, and supposed to be rainy for the next couple of days. Not much new on the project front... just pressing on.
Posted by Erin at 11:28 AM 5 comments:
Labels: Halifax 2007

Lost in a Fog

If you get the chance today, click on one of the webcams to the right and you'll see... well... you won't see much. The harbour - and most of Halifax really - is shrouded in thick misty blanket of suspended water vapor. The fog horns were blaring at 5 o'clock this morning. Going over the bridge this morning was quite spooky... it was like the bridge to nowhere. The tall ships, which I'm told are supposed to me making their entrance today, will be doing so under the cover of fog... if this were back in the old days, this would be a perfect time for pirates to strike!

I've been working a great deal on my project, but have been hampered by some tummy trouble. Got 6 tubes of blood taken today to try and nail down the problem. Otherwise, things are going fine, though I do feel a bit behind. I've been on CBC radio twice, and am going to be in the Chronicle Herald in an attempt to drum up volunteers. The coverage is also good for Saint Mary's University, and lets the people know what neat stuff is happening here.
Posted by Erin at 12:26 PM 1 comment:
Labels: Halifax 2007 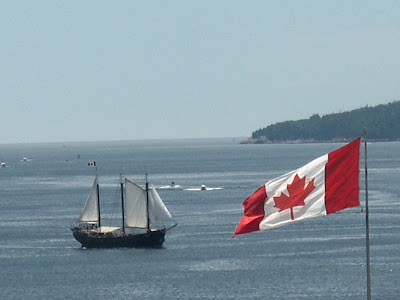 Yesterday I spent my day taking in the Canada Day festivities in Halifax. The ferry was absolutely packed on the trip over to Halifax, and I imagine it was all day. The ferry usually only runs from 10-6 or so on Sundays, but yesterday extended its service until midnight. The ferry captain was clearly enthusiastic about the busy day, wishing everyone a happy Canada Day over the intercom.

My first stop was Citadel Hill in downtown Halifax to watch the Tattoo Parade. The parade consisted of the acts from the Royal Nova Scotia International Tattoo, which I will come to later.

After the parade, I headed down to Pier 21 - place I've been meaning to go since I've been here. Two Christmases ago, I discovered the ship on which my Grandpa Weisz came over from Yugoslavia through the Canadian Genealogy Centre. All of these ships passed at some point through Pier 21, and the museum there houses photographs of just about all of them. So, I ordered a photo of the Koln (also spelled Koeln) from them and gave it to Mom as a Christmas present. So, being in Halifax, the home of Pier 21, it was on the top of my list of places to visit.

Pier 21 was recently named one of the 7 Wonders of Canada. From 1928 to the early 1970s, Pier 21 was the main immigration point into Canada. Ships carrying passengers leaving the only life they knew - often with only a single trunk (or less still, a suitcase) full of belongings - would land at Pier 21 to begin their new life in a strange but welcoming new country. Pier 21 is now a museum, complete with interpretive exhibits about the immigrant experience, and a resource centre with ship photos, immigration records, and friendly researchers to help you out.

Included in the admission is a guided tour through the exhibit hall, and a 25 minute multimedia presentation about the pier. The multimedia presentation is visually impressive, consisting of 2 scrims with a set behind. Characters are projected onto the scrim, giving them the appearance of interacting with the set. It gives a very ghostly impression, drawing you into a sort of fly-on-the-wall look at the past. The presentation goes through all the different types of immigrants that came into Canada, concentrating on post-WWII immigrants, troops returning, war brides, Jewish children, and other refugees.

During the tour we were able to see the original doors through which the immigrants would have gone through coming off the ship that they called home for 10 or more days. We heard one harrowing story Canada's first refugees who that came over on a ship called the Walnut. The Walnut was only meant to hold 40, but was home for 3 long and seasick weeks to over 300 refugees from Latvia and Lithuania. When they arrived, the Canadian government had never had to deal with refugees before - they all lacked any sort of official paperwork or documentation, there was no warning that these people were coming. They were housed at Pier 21's detention centre for 6 months before the decision was made to let them stay. No doubt they were treated well, but 6 months of waiting for a decision about your fate must have been gut wrenching.

Of course, not all voyages were so harrowing. On the larger ships of immigrants there are stories of being extremely comfortable and well fed - though often times very seasick.

After the tour, I decided to check out the resource centre - for some reason 2 years ago I thought that finding Grandpa's ship was sort of the end of that genealogical road. Since my Grandpa and his family came to Canada from a war-torn country, there is very little information from that side of the family. My Grandpa died almost 20 years ago, and the last one of his immediate family left is his younger sister who was born in Canada - so there really isn't much oral history to go on. But, I thought perhaps I could find something of interest.

My Great-Grandpa, Georg Weiss, was a Yugoslavian German from a town called Cib (pron: chabe) and fought in WWI for the Germans. He was captured by the Russians, and was a prisoner of war, working for a doctor as a gardener. During that time he bribed the doctor to falsify his medical records - if you weren't healthy you were let go. He was then released. On May 3rd, 1926 he left on the S.S. Yorck from Bremen, Germany for Halifax, Nova Scotia where he arrived on May 12 with $30 in his pocket. He was sponsored as a farmhand by a man named Dan. H. Johnson from Winnipeg. He was listed as being able to read German - which probably meant that he did not know much English, if any.

Three years later, my Great-Gramma, Great-Uncle, and Grandpa followed - landing in Quebec City on the Koln (also spelled Koeln). They had only $15 between them, and were listed as being sponsored by my Great-Grandpa who at that time resided in Tecumseh, Ontario. Again, they are listed as being able to read German, so likely didn't know any English. My Grandpa was only 7 at the time. It seems to be at this point that the last name changed from Weiss to Weisz - not sure why though.

I was extremely excited to see these records and left Pier 21 with copies both immigration records and a picture of the Yorck. Pier 21 charges a fee for these services, but in my mind it was well worth it. While I may never know what my family's life was like in Yugoslavia, I at least now have a better idea of what the beginning of their life here in Canada was like. Seems very appropriate spending your country's birthday finding out how you got there.

After Pier 21 I had a dinner of fish n' chips and then went to the Royal Nova Scotia International Tattoo. Words fail to describe the experience. The Tattoo consists of military bands from all over the world, as well as some acrobatic acts, singers, and dancers. It's a variety show that provides everything from pop music, to marching, to opera. It really is quite the spectacle, and if you ever have the opportunity to go, do so. I think my favourite parts were the navy vs. army obstacle course (they entered from the catwalks of the convention centre down ropes as if they were coming down from a helecopter), the flying grandpa's (an acrobatic act from Germany which featured a hapless "Halifax Regional police officer"), the Norwegian drill team, and - of course - the Scottish pipe bands.

So, there you have it. For me, Canada entered its 140th year on a high note.
Posted by Erin at 11:10 AM 3 comments:
Labels: Halifax 2007
Newer Posts Older Posts Home
Subscribe to: Posts (Atom)