So, now that southern Ontario is getting a snow storm, the media is dubbing the little-more-than-a-foot of accumulation "Snowmaggedon". Pshaw... where were they when central Ontario, specifically the Haliburton Highlands, got 24 hours and over 18" of the white stuff?? Seriously journos... come up where I live... where real winter has been here for 4 weeks already. 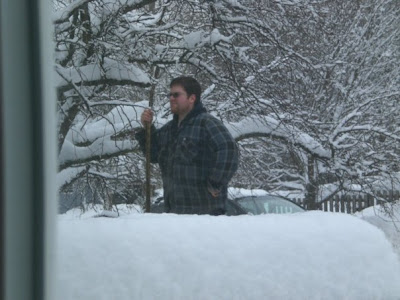 That isn't to say I don't see the humour in Snowmaggedon. It is funny...

And the snow is a royal pain in the ass. I was really happy this morning to not have to brush off the car and scrape ice of the windshield. The snow falling right now is really light and fluffy... the kind that is super easy to move around, but kicks up when you're driving and makes it hard to see. Last week it was really heavy and sticky... the kind that soaks into your trouser cuffs and boots and makes your feet cold for the whole ride home.

I got off work early today because the college I work for shut down. It was pretty funny because it was actually the two main campuses to the south that shut down, and made everyone else shut down with them. Everyone in Haliburton just sort of looked around and went "and this is unlike any other day up here how?" These are people who drive to work along a windy road with hills when there is a foot of snow on it with ice underneath.

*sigh* But I don't work there anymore. I'm off to other things... specifically Western's MLIS program in January. I'm not relishing the drive to London in January... but I am looking forward to being down in the cultural mecca of southwestern Ontario... and being somewhere I can perhaps go out on a date with someone who I don't have to do a genealogical background check on.

Do have to say though, I am looking forward to Christmas. Not for the presents, but for the time off with my family and cousins. Oh, and that brings us to the food part of the blog... there was a food theme wasn't there?

Turns out Dad has type II diabetes. Went to the hospital for a stomach bug (which turned out to be just your run of the mill oh-please-kill-me-now stomach bug), and came back with metformin and an information package. So, this is going to be a sugar-less Christmas, which has me trolling the web for new recipes and ingredients to create diabetic-friendly desserts. I'm going to do some experimenting this weekend, so expect a blog entry on that soon!
Posted by Erin at 4:00 PM
Labels: Miscellaneous 2008