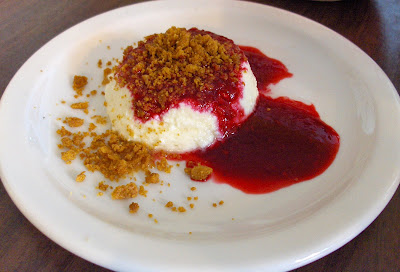 Every Christmas has a challenge. Previous years have seen Norwalk outbreaks, flooded basements, and the oven breaking (necessitating our cooking chicken over the wood stove in the basement). This year, it is making Christmas as diabetic friendly as possible.

So I've been looking around the 'net at diabetic recipes, normal recipes, and plugging everything in to some of the more reputable recipe analyzers to come out with a desert that will make the family happy, but not raise their blood sugar. In a strange incident where Lady Murphy seemed to be absent, I've hit upon a near success right off the bat. Well... not so much near success, as success that I can see tweaking just a smidge for next time.

This cheesecake recipe is based on Anna Olsen's Honey Yogurt Cheesecake. I'm emphasizing the less in sugarless here because there is still sugar in the graham cracker topping, and the raspberries. But, these are well within an allowable intake according to the Diabetes Association information that my Dad has received.

Mix these together and place in a strainer lined with paper towel, perched over a bowl. Refrigerate for 24 hours, emptying the bowl of liquid every so often. In 24 hours you'll have a very thick mixture of yogurt and cheese. NOTE: I did this for less than 24 hours... and it turned out way less custardy then I would have liked. Best just think ahead and go the full 24.

Add to the yogurt and cheese mixture:

1/4 c. granular Splenda (or less if you aren't fussy on the Splenda tang)
zest of a lemon
splash of vanilla
1 large egg

Blend this until nice and smooth with a spoon or whisk. Evenly divide amongst 12 lightly greased muffin tins. Bake at 325 F for 30 minutes. Remove from the oven and allow to cool for 30 minutes, then refrigerate for at least a couple of hours.

In the meanwhile, thaw and mash up some frozen raspberries. Squish these through as fine a strainer you have to get rid of most of the seeds (or not... I just hate getting raspberry seeds stuck in my teeth). If the raspberries are super tart, add some Splenda to taste if you like.

Also, crush up enough graham crackers to equal one cracker per person (so 12 if you are going to be serving all 12 cakes). Add a little melted butter until crumbly, spread on a small sheet pan and toast for 5 minutes (or less... don't burn it).

Once the little cheesecakes have been chilled in their tin, run a knife around the edges, and then turn them out onto a cutting board (just easier than using a plate or platter).

Just before serving, place a cheesecake on a plate, drizzle with the raspberry mixture (about a tablespoon does the trick), and top with some graham cracker crumble.