So it's a New Year, and you can see I've tidied up the place (can't say the same for my room... but that too will come), and I now have a snazzy new URL! Makes a bit more sense than "erin in scotland", doesn't it? More changes will occur throughout 2009. I'll try and make up some graphics of my own, instead of using the canned ones from blogger.

We had two good ol' birthday celebrations... one for my brother and one for my sister. My brother and I are both sci fi geeks, so I made him a TARDIS gingerbread house. Really... it's 5 pieces of gingerbread mumified by royal icing and sprayed with blue food colour (which creates an ominous haze in your kitchen). But the effect was still carried of with my usual mediocrity. This is actually a sequel to the TARDIS cake I did last year (which I can't seem to find a picture of). Why a TARDIS? Well, besides being a Doctor Who fan... it's a big rectangle. So, either a TARDIS, or the monolith from 2001 *yawn*. 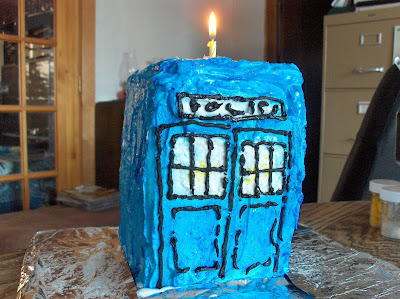 I also made my cousin's hubby zombie gingerbread men. Got the green by using neon green food colour tempered by regular green, yellow, and a touch of blue.

Christmas here was pretty low key. I cooked the turkey and it came out wonderful! I used Alton Brown's method of steeping the aromatics in the microwave before pouring the lot into the bird. I didn't brine the sucker though... that's a lot of work, and we don't have a 5 gallon pail kicking around to brine a 20 lb turkey in. That's an experiment for another time. Mom made her best-in-the-world stuffing, which I ate waaaay too much of.

I did the sugarless cheesecake thing as well. This time I had let the cheese and yoghurt mixture drain for 24 hours... much better texture and flavour... and I cut the splenda in half. Just about everything agreed with Dad's blood sugar.

New Year's eve was spent at That Place in Carnarvon, then at home munching on cheese and grapes. I managed to stay up until midnight... hooray!

This morning I am sipping a homemade latte and watching my cat try and worm his way around the mess on my desk. He is a trained killer, now exiled to the indoors because of the cold and snow.... but back to the homemade latte!

I started drinking cafe latte's in Scotland, namely at Nero's Italian Coffee. Then I came home to Minden where there are precious few places to get them... Gravity House is only sporadically open during the off season, and then there is Heritage House in Haliburton (which is also haunted from what I hear). Both make good lattes, but are hardly at my fingertips like a Second Cup or Timothy's would be in the city. Someday, I would love one of those espresso machines with the foaming wand... but right now I don't have a kitchen to put one in, let alone the money to buy one. So I've devised an uber simple way of making your own latte, without any fancy equipment.

Pour milk into your favourite microwave safe mug, and nuke on high for 2 minutes (or so).
Meanwhile, boil the kettle and in a small cup (if you have an espresso cup, it works very well) mix up a single shot of espresso using instant espresso powder.
Take a whisk to the milk, rotating the whisk between your hands until the milk froths up.
Pour in your espresso as artfully as possible and voila! Almost but not quite instant latte! 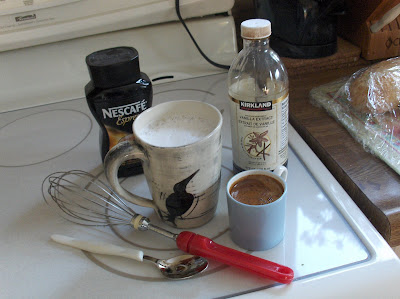 Btw... the mug with the blackbird on it is done by local potter, April Gates. She does really cool work!
Posted by Erin at 10:14 AM
Labels: Miscellaneous 2008