I don't usually write letters to the editor. I can't actually remember the last time I did... might have been about bus passes when I was at University of Waterloo. This week, I was compelled to write a letter to the County Voice in Haliburton, Ontario in response to a small innocuous looking blurb in the bottom right corner of page 10 of the 26 August 2010 issue: 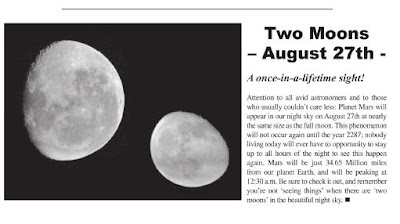 I have received this hoax many times in my inbox over the last 7 years or so. I remember "Mars fever" in 2003 when it was actually closer than usual, and even went to the observatory at University of Western Ontario to see the red planet through their telescope. Unfortunately the line was much too long, and I wound up using a friendly amateur star-gazer's telescope in the soccer field where I was also shown some nifty star clusters and nebulae.

It frustrates me that what has become a hoax, and such a well-known one, would wind up in a proper newspaper with seemingly nary a checked-fact found. The science-geek in me even cried a little... until I told her to man-up.

I'm going to reproduce my letter here in full. It may not even get published, or could be edited for space. So I thought it would be nice to satisfactorily air my grievances on the subject via blog as well.

I hope that your readers weren’t too disappointed to find out that Mars was nowhere near the size of the moon on the night of August 27th, as “reported” in your paper on August 26th. I’d wager that most of them were not, as the email forward that has been circulating about this alleged view of Mars has probably hit their inboxes several times since it began in 2003.

I really hoped that the small innocuous blurb on page 10 was a joke when I read it. I checked my calendar… it wasn’t April 1st. I also didn’t see any fine print saying “tee hee hee!” though I’ll admit my eyesight isn’t very good (though still good enough to NOT miss a giant moon-sized Mars in the night sky). But when no one jumped out of the bushes laughing “Bwah ha ha ha ha! Fooled you!” the sad realization dawned on me that you may have been serious.

Do email forwards really pass as solid journalism today? Did anyone even think to do a quick search on the internet for “mars AND moon” to see if this may be a hoax? Perhaps take a few minutes to poke around NASA’s website? What about phoning up Trent University in Peterborough? They have a Physics and Astronomy program. I’m sure a professor would have been happy to set the Mars v. Moon record straight.

In our sound-byte culture where so much real information gets lost in the noise of punditry and ‘truthiness’, having a hoax published as fact in one of our local newspapers is just sad. Fact checking appears to have become something only done if it doesn’t get in the way of a good story. Add to this a lack of scientific literacy which allows for modern-day snake-oil salesmen to sell skinny-pills and nether-region-girthers, and the intellectual landscape looks very grim.

As a local paper that is distributed to every mailbox in Haliburton County that will take it, you wield a great deal of power in educating the public about what is going on in the world around them. I’d hate to know how many people really did believe that Mars would be as big as the moon on Friday night, and then wound up feeling kind of dumb when it wasn’t. A quick fact check is the least you can do to make sure you aren’t misleading your trusting public.

Please, use your powers for good and not evil. Now, if you’ll excuse me I have some email forwards to attend to. I hear Bill Gates is giving away some money…

PS – Neil deGrasse Tyson, astrophysicist and director of the Hayden Planetarium in New York City does an excellent blog entry about the “Mars virus”, and is worth having a look at. http://www.haydenplanetarium.org/resources/starstruck/marsvirus